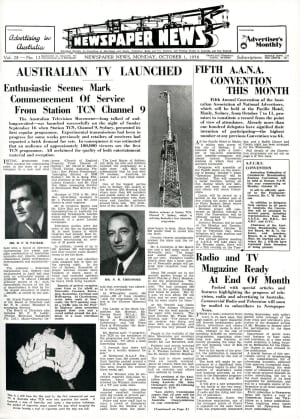 Today marks 60 years since the launch of commercial TV in Australia. It seems like a relevant time to dive into the AdNews archives.

We're taking a trip down memory lane to see what AdNews' forebear' Newspaper News was writing about the launch of television back in 1956. It's quite a trip.

Nine Network kicked things off with Bruce Gyngell making the opening remarks: "Good evening, and welcome to television" to usher in the new era of viewing.

Cick the images to read it.

In November 1955 we were reporting on the 'high standard' of TV in the UK.

In December 1955 AWA installed an audition room and TV was being heralded as a medium that would 'help promote understanding between the people of the world” and a “major contributor to world peace”..

Rate cards were issued in March 1956. Things were much simpler back then!

Advertising attacked as “unnecessary” in April 1956. While TV rights for the upcoming Melbourne Olympic Games were yet to be granted, the first TV ad bookings were made by advertisers including Nestle and Philips.

Stations were prepping to be ready to air for the Melbourne Olympics in 1956 – for a fee of GPB5 for viewers.

In June 1956 a code of ethics for TV was mooted – ahead of the Broadcasting and Television Bill 1956. also a TV Shock – in that permission was needed from local Sydney councils before the new TV mast was erected.

Agencies were upgrading their capabilities for this new medium. Back in 1956 the newest thing to have was an in-house audition room. Geroge Patterson's Sydney Office's new audition room made the news in August 1956.

In September 1956 the ABC outlined its programming plans and a 'Melbourne girl' was named 'Miss TV'. She won 500 and a contract with ATN

This illuminating article looks at 'Television – the new tool in marketing'.

The UK was praising the launch of Australian TV from the get-go.

In November 1956 advertising men from all states gathered as part of the tenth convention of the Australian Association of Advertising Agencies and discussed the future of TV.

Enjoy that trip down memory lane? Share your comments below.