How Coke changed the way it uses data to drive business 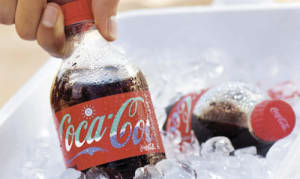 Coca-Cola hasn’t turned away from mass-marketing, but it is becoming more focused on the “brilliant basics” of data marketing to reach the people it needs to drive the business, according to Justin de Graaf, Coca-Cola’s global director of data strategy and precision marketing.

De Graaf was speaking at the ADMA Data Day conference in Sydney earlier this month.

Coke’s media team is focused on the “best content and the smartest investment” he says.

“We spend a lot of money on media so we want to get the best investment for our shareholders, so we are laser focused on making sure our buys are hitting the right people in the right place. Reaching the audience that is more likely to take action is what we want to do, it’s much more important to us than reaching everywhere - particularly in digital.”

A turning point for the data team, which has grown from two people to nine in the last year and seen its budget increase by a factor of 10, was finding new ways to use its underutilised CRM data, says De Graaf.

Coke’s loyalty programme is the largest of any FMCG brand in the world with 24 million unique users. Each of them has engaged with the programme in some way, signed up online or entered codes to win prizes, but the soft drinks giant wasn’t making much headway.

Coke was predominantly using outbound email marketing to connect with those customers, but De Graaf says “the reality is just under 3 million of those people were engaging with our content”.

“If we’re sending you 50 emails [a year] and you don’t open any of them, are we still marketing? I would say not,” he says.

“That relationship is temporarily paused. It’s not over, it's never over, but we had to change the way we were using that data. We are responsible for finding more ways to use the data we have access to.”

With a few tweaks, including using third party data alongside its first party data and creating lookalike audiences it could make use of within display advertising, it increased the reach to 18 million - a 600% hike.

“Then we can reinvest that money into media and you can imagine how happy our brand team is now they have more media money to spend.”

Influencing the organisation on data

The role of data professionals within an organisation is also to prove to the board that using data offers a more cost-effective and successful business outcome - selling more product, at a greater margin, for a lower cost.

“There is a lot of talk about big data, and that’s interesting, but a lot of what we’re dealing with is the fundamentals that work. The reason we're doing all these brilliant basics is to prove the value of the data,” he says.

If the data guru’s want to influence the business to better apply data to driving results there are a few things they need to do, he says. The first place to start isn't marketing, he reckons, it's finance.

That’s because even marketers often have no idea what the data teams within an organisation are really talking about, he says.

“One tip, is start with finance. It’s not a logical first step … but in the end, they are responsible for making sure company dollars are spent the right way .. and they are predictable.

“If you go into finance… they know where dollars are being invested so if you want to have a greater chance to influence, start with them. They don't have time for nonsense… if my idea is stupid my finance team will literally tell me to leave,” he says.

De Graaf’s other tip is that data has to make itself relevant to business leaders by talking about the metrics and outcomes that are important.

“Our team’s budget is coming from these execs so we start every conversation with business value: that seems pretty [obvious] but a lot of teams don’t do this. Listen for what metrics they are talking about… what are they trying to do? Use that in your story and try to connect it back,” he advised.