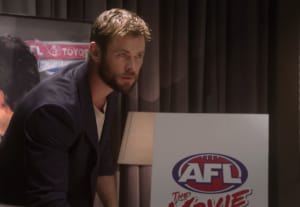 The AFL is bringing back the classic “I’d like to see that” tagline in a big way, tapping Chris Hemsworth for the promotion of its upcoming season.

In the 60-second spot, by Cummins&Partners, Hemsworth is speaking passionately about his team, The Bulldogs, who scored their first AFL premiership in last year’s grand final.

Leveraging his celebrity status, Hemsworth begins pitching a movie to a room of Hollywood executives around the possibility of the Bulldogs taking out the cup, despite not winning a premiership in 62 years.

When the Hollywood moguls question the likeliness Hemsworth’s plot line, he responds: “This is a modern day epic… This is footy”.

AFL head of marketing Julian Dunne said that the broader AFL marketing campaign highlights what makes the game unique and spectacular and the passion of the fans.

“The Western Bulldogs premiership win is one of the great sporting stories, and with Chris being such a huge Bulldogs fan, he was a natural fit.

“He was really passionate about the campaign and involved through the whole process, including the idea and the script. He was brilliant to work with and we were thrilled that he wanted to be involved,” he says.

The campaign will roll out across TV and also as content series, featuring comedians such as Wil Anderson, Lehmo, Cal Wilson and Joel Creasey.

“Extending the campaign throughout the season allows for fans to take ownership and tell us what they’d like to see this year, it will be no doubt fast become part of the AFL footy vernacular," Dunne says.