Women's AFL off to a flier as 2.6m viewers tune in 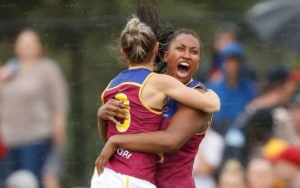 The inaugural round of the women's AFL has drawn impressive crowds, TV audiences and action. Photo courtesy of @aflwomens on Twitter.

Seven's coverage of the inaugural AFLW league has gotten off to a flying start with a national reach of 2.6 million viewers over the weekend.

On Saturday night, the matches between the Western Bulldogs v Fremantle, and Adelaide v GWS Giants (SA airing only) scored a combined peak audience of 885,000 and average national of 600,000 on Channel 7 and 7mate.

Testament to its success is that the AFWL was the top-rating programme in Melbourne on Friday night with an average audience of 424,000.

The promising TV audience was even eclipsed by the capacity crowd of 24,568 at Ikon Park watching Carlton win the competition's first ever match.

"It was an amazing opening round of the AFLW  reaching well over 2.5 million people across broadcast and live streaming and creating more winning nights for Seven," Seven chief revenue officer Kurt Burnette tells AdNews.

"A special mention to the broadcast sponsors Harvey Norman, Kelloggs, Hostplus, Chemist Warehouse, NAB, Village Roadshow, Woolworths, Bunnings and AAMI who all had the vision and confidence, as Seven and the AFL did, to invest in what was a special weekend for the further advancement of women in sport."