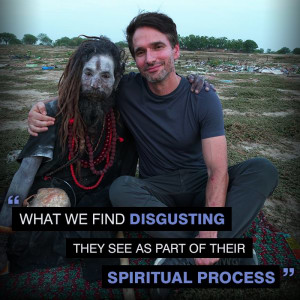 The program pulled an audience of 537,000 metro viewers for its first episode, slightly down on last year's premiere that attracted 588,000.

It was the second most watched program in all key advertising demographics, after Ten's MasterChef, which saw 845,000 metro viewers tune in.

Sampson shared his excitement over the ratings on Twitter, saying: "Who says young people just want to watch ‘kiss it, date it and leave it’ only!"

Wow! Just realised #BODYHACK was 2nd of the night in all the younger demos!!! Who says young people just want to watch ‘kiss it, date it and leave it’ only! Thanks for watching @channelten pic.twitter.com/fip70wu42Z

The confronting episode saw Sampson join the sadhu's of India and immerse himself within their culture.

The former Leo Burnett chairman took part in a ‘penis yoga’ ritual in which naked men bend their private parts around a sword, he witnessed one of the elders eat human flesh and get high from a frog.

Sampson, who regularly features on ABC's Gruen, thanked Channel Ten for pushing the boundaries of primetime TV and not censoring out characteristics of the sadhu culture that the Western world could deem controversial.

Just out of interest...they wouldn't show this ep on American TV (it's on Discovery) - I'm proud that @channelten was willing to put it on a commercial network so that more people get a chance to see it. Australia is the best!! #BodyHack