Brands get behind netball as opening round reaches 850k viewers 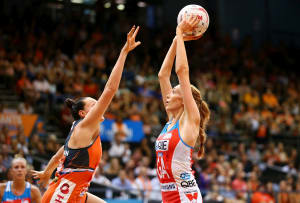 The Giants (orange) got off to a good start against local rivals the NSW Swifts in the first round of Super Netball. Photos by Getty Images.

The inaugural round of Suncorp Super Netball has reached 850,000 Australians and the sport is on track to enjoy a huge 150% lift in commercial backing this season.

Netball Australia CEO Marne Fechner tells AdNews the ratings were about on par with expectations leading into round one but what's important is how the game grows over the season.

“Ratings are really important but what's more important is how we grow those audiences and appealing to new markets,” she says.

“Broadcasting in prime time is absolutely critical for us and our intent is that this is a really exciting product and we know once people see it, either live or on television, their perceptions of netball will change. The fierceness of the competition, the athleticism of the players, the fact we have 17 international playing means it it the best league in world netball.”

Nine's arrangement with Netball Australia extends well beyond broadcasting – its on board as a revenue-sharing partner. The revenue-sharing agreement covers advertising, sponsorship and some merchandise.

As a result, Nine has a member of its sales team sitting permanently within Netball Australia to help the sports body to help sell netball as a platform.

“We are excited about how Australian audiences are embracing Netball on 9Gem,” said Amanda Laing, managing director of Nine. “The decision to move the game to prime time has been clearly validated. With an overall national reach of more than 850,000 viewers, it is clear that Netball is well on its way to becoming a staple of Saturday night sports viewing.

“Netball needed to move away from the traditional sports rights structure. To pay a rights fee for a sport that at that stage was not doing big numbers on a Sunday on Channel Ten, it's very hard to pay a big rights fee for something attracting an audience of 40,000-50,000.

“We needed to do something where we would work together to grow the revenue and the viewership. Putting it in prime time is a great leap of faith by Nine to say we believe we can move the needle on the audience watching this sport.”

Fechner points out that netball has tried for a number of years to grow its reach to a predominantly female audience. The partnership with Nine allows it to combine sponsorship and broadcast, which makes it easier for commercial partners to tailor sponsorship packages and integrations.

“We also have the power and might of the Nine sales team behind us and talking about netball to agencies and brands that arguably haven't had an opportunity to speak to in depth," she adds. “By the time we've finished in 2017 we'll be looking at a 150% growth in our commercial program, which is outstanding."

New partners coming on board this year include Suncorp, which are the sports principle and naming rights sponsor but also back the junior program 'net, seek, go'. Then there's the addition of major sponsor Nissan and a huge increase in support from Samsung, which launched this memorable spot to promote the sport last year.

“Our new broadcast platform and growth in our commercial program means we've been able to launch an Australian league; previously the league was a joint venture with Netball New Zealand," Fechner explains.

“Our athletes continue to be the highest paid female athletes in this country on the way to full-time professionalism. The other thing is how do we invest in more people playing the game and bringing fans to the game.”

The grassroots support of netball is a third priority only by virtue of the fact that the sport is already so large. The games over the weekend all sold out and one stadium had to be increased its capacity from 7,000 to 10,000 to cater to demand.

Action from the Firebirds vs Lightning game. Photos by Getty Images.

Fechner harbours ambitions for the Super Netball to grow to a size in which it can be played in stadiums like Rod Laver Arena and Sydney's Qudos Bank Arena (Sydney's Superdrome) on a regular basis.

For advertisers looking to reach a captive, female audience – there is no bigger game in this country. For a commercial TV channel, its a mouthwatering proposition that for Nine was worth a prime time punt.

“We were ambitious and we've been really pleased with the response of advertisers and sponsors,” Laing says.

“Corporate Australia brands want to tap into the massive participation sport that netball represents. They want to talk to the viewers of the sport; they're the one making a lot of the purchasing decisions.

“We're all going to benefit from the rising tide of women's sport both on television and corporate Australia. Netball's not going to give any ground, it's going to fight for its position in the pecking order, but we're happy for the success of all other women's sport."

With the AFLW on Seven off to a flying start and Super Netball attracting unprecedented corporate backing, 2017 could be the year women's sport on TV comes of age.