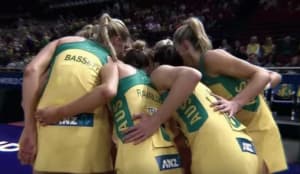 Samsung is throwing its weight behind netball in Australia, backing three teams, the Australian Netball Diamonds, the Queensland Firebirds and the New South Wales Swifts.

The electronic giant is the official sponsor and exclusive electronics partner of netball in Australia, however to promote these new partnerships with the teams, the brand has created ‘Rethink Role Models’, an integrated campaign that is comprised of a content series as well as digital, experiential at a grassroots level and out of home executions.

Samsung's corporate vice president and chief marketing officer, Philip Newton says: “When we reviewed our sponsorship portfolio, we identified a number of opportunities with netball that were aligned to our business.

“There are more than 1.2 million participants in netball in Australia, presenting a community that Samsung can engage with as well as support to help grow the sport and champion its athletes.”

The mini-series of six short films will roll out as part of a creative platform over the next seven months across social, digital, out of home, experiential and television advertising.

Head of corporate brand for Samsung, Holly Adams says: “The campaign is thought leadership in nature and speaks to Samsung’s commitment to being more than just a typical sponsor. The sport of netball and our ambassadors have proven to be exemplary advocates who will inspire the next generation of Australians.”

The ‘Rethink Role Models’ mini-series highlights personal battles of injury, losing a family member, self-confidence and sacrifice. The series champions what the athletes stand for, as well as the broader qualities they represent.

You can watch all the videos here.