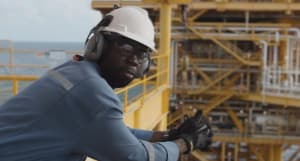 The initial campaign includes two 30 second TV commercials, which will be accompanied by print and online activity and leveraged through social media. It has also dropped the 'Billiton' part of BHP Billiton name and waves goodbye to the logo's three dots.

It's the first big ad push the company has done in three decades and is designed to demonstrate “the important role” BHP plays in the Australian economy and community and more broadly in global economic growth and development.

As the campaign progresses, the materials will grow and evolve. A BHP spokesperson tells AdNews that Think Big will also be launched globally in a phased approach into other BHP markets. The creative will likely be tweaked for other markets.

The ads highlight the Australian heritage of what is now a multinational miner and the cast of the brand campaign is largely BHP employees.

BHP chief external affairs officer Geoff Healy says: “We fundamentally believe that as society changes it is up to us to make the case – more confidently and effectively – for the positive role that well-run and responsible companies play in society,” Healy says.

“The advertisements will talk about the importance of our Australian heritage, our contribution and our commitment to communities where we operate. The campaign will focus on what people can and should expect of us.

In launching Think Big Healy says it will take the opportunity to change its logo and move to a brand that Australians have known for generations – BHP.

“This abbreviated simple expression of our organisation is used colloquially around the world.”

BHP Billiton was created in 2001 through the merger of the Australian Broken Hill Proprietary Company Limited (BHP) and the Anglo–Dutch Billiton. It's hoped the change in identity and axing of the Billiton name could shore up local support.

The slimline, lower-case letters in BHP's current logo will gradually be replaced by the bold, capital-letter logo BHP used prior to the merger.

Ted Horton's Big Red agency won a competitive tender for the rebranding exercise about 18 months ago. Big Red is known for its Coles "down, down" campaigns as well as federal Liberal election campaigns.

The media spend is between $10 million to $14 million on this launch, but AdNews understands the annual spend could be as much as $30m – making this one of Atomic 212's largest clients. The independent agency made industry waves last year after it won Origin Energy from GroupM's agency Mindshare in May.