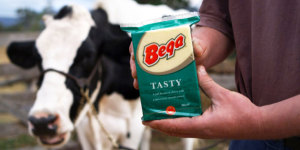 Bega has consolidated its media planning and buying into Thinkerbell, moving away from Carat after 10 years.

Thinkerbell won the creative for Vegemite, owned by Bega, earlier this year from WPP agency JWT after it held the account for 74 years.

The shift sees Bega streamline and consolidate all creative and media together with Thinkerbell working across Vegemite, Bega Peanut Butter, Farmer’s Table and more.

Bega marketing director Ben Hill said the change acknowledges the partnership Bega has been building with Thinkerbell over the course of the year after being appointed the strategy and creative agency in March.

“Since launching the ‘Tastes Like Australia’ Vegemite campaign together this year, we have enjoyed growing both our businesses and business partnership”, Hill said.

“For us, it makes sense to have all our creative and media thinking under the one roof. We believe creative, strategy and media planning should work cohesively and be seamlessly integrated. It makes sense to have one partner and the results we have been achieving with Thinkerbell this year give us full confidence we have made the right decision.”

Thinkerbell, which is minority owned by PwC, was founded 18 months ago by Adam Ferrier, Ben Couzens and Jim Ingram.

Having previously worked at Cummins&Partners, one of the larger full-service agencies in Melbourne, Ferrier, Couzens and Ingram have experience in servicing both creative and media together.

Reid said the win signals a change in the industry, with more brands interested in integrating buying and creative.

"Working with Bega has been brilliant. Strategically and creatively we’ve clicked and we're looking forward to extending the relationship into media planning and buying. We’re honoured to be working with Bega Foods to continue building their powerful and much-loved Australian brands," she said.

It's the second media win for Thinkerbell in a matter of months, picking up the Melbourne Racing Club account in October.

The account loss comes as another blow to Carat, which over the last 12 months saw Mondelez and Adidas switch up their global media arrangements. With some smaller wins under their belt, including Grill'd and Beacon Lighting, newly appointed managing director Simon Williams previously told AdNews he remains confident and is now rebuilding the agency's "winning culture".