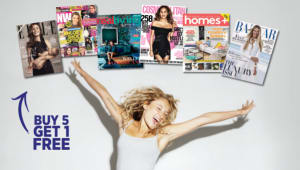 In a bid to overcome barriers to purchase and build a consumer database for ongoing targeted campaigns, Bauer Media's loyalty app has been going from strength to strength.

Bauer launched the Reader Rewards app in 2014 and has seen a 1.6% increase in sales year-on-year compared to newsagents without the program. The free app allows the publisher to collect data on buyers and send out personalised marketing messages to drive them back into newsagents.

The Reader Rewards scheme requires readers to register their name and email address, as well as some statistics such as their date of birth. In return they receive a 'star' for buying any of Bauer’s titles at participating newsagents. The fifth magazine is free for the customer and the newsagent, which redeems the cost from the publisher.

Between April and June this year, Australian newsagents have sold more than $48,000 worth of magazines through Reader Rewards and given away more than $15,000 worth of free titles to consumers.

Bauer’s national newsagent manager Julie Green tells AdNews one of the initial objectives of Reader Rewards was to build traffic to newsagents.

“Consumers are loyal to rewards programs and they are also always on their smartphones, which is why we launched Reader Rewards – to tap into these areas,” Green says.

As an example of how seriously Australian's feel about their loyalty programs, Green references the consumer backlash following Woolworth's decision to scrap its initial rewards scheme.

Reader Rewards also runs promotions, such as SuperStar week, where consumers earn extra stars for every purchase, which according to the data, gets readers to their free magazine quicker and therefore generates “incremental” sales.

During these promotions, newsagents see sales uplifts of 20% compared to periods with no promotion running.

“From a data perspective the scheme gives a clearer version of how consumers shop and what product mix they are buying,” Green says. “These insights then help Bauer make editorial and marketing decisions.”

Despite client interest, the app does not carry advertising as it is about promoting the Bauer brand, explains Green. However, she says there may be opportunities for brands to get on board in the future.

“One has to be clued in to how savvy consumers are. As soon as you push content they don’t want to receive, they will disengage,” she says.

“Right now it’s about monetising the home of magazines – newsagents – and pushing the consumer back into that space.”
Like many publishers, Bauer continues to back newsagents as a core channel. Earlier this year Bauer joined forces with Pacific Magazines and NewsLifeMedia to promote the magazine medium and drive newsagency sales.

Green says the Reader Rewards app has enabled Bauer to identify trends in purchase, such as women buying their husband’s men’s magazines. It has also shown women are using the program to buy a cheaper magazine such as NW to receive a free luxury magazine, like Elle.

Despite having to reimburse newsagents for these sales from its own pocket, Green says the benefits of the program to Bauer outweigh the loss of potential revenue.

At the time of the launch, head of BauerWorks Eugene Varricchio said he expects to sign 1,400 newsagents onto the scheme within the first six months. While Green is happy with the programs results, it only has 450 stores currently using the program, down from 800 in 2014.

Green says the biggest challenge in the uptake of the program is the different levels of technological skills, with some regional areas struggling to embrace the system.