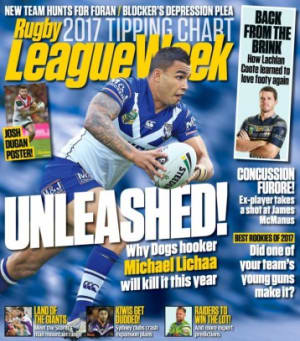 Bauer Media will close its Rugby League Week magazine just one week into the NRL season.

While no one wishes to buy the whole magazine, Bauer has reached an agreement with the NRL for it to acquire the 'Immortals' element from Rugby League Week - which is a concept in the magazine that awards the game's most prestigious players.

The NRL will also take on the magazine’s historical archive.

“For more than four decades Rugby League Week has been a prominent voice connecting the game of rugby league to its fans. While it’s never an easy decision to close a brand with such a distinguished heritage, commercial realities and our focus on key consumer categories have led us to take this action," Chan says.

“I want to thank all those who have worked on Rugby League Week over the years, in particular the current team of dedicated professionals led by editor Shayne Bugden and editor-in-chief Martin Lenehan, who have consistently produced outstanding league coverage for the audience.”

The move follows big changes at Bauer as Chan works to cut costs across the business. Last year, Bauer sold off five of its Adventure titles and Dolly's print asset was axed. It is understood that more magazines will be axed or sold off as Bauer focuses on digital acquisitions.

The final double issue of Rugby League Week will be published on 27 March. Bauer will be "discussing options" with those impacted by the move.