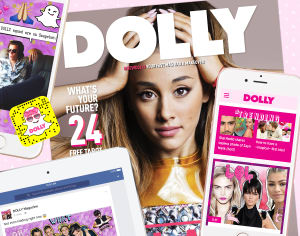 Bauer Media has axed its teen print magazine Dolly after 46 years. The move comes less than a year after it flipped from a monthly to a bi-monthly print edition.

Bauer says it is responding to the changing demands of how readers engage with the brand by switching it to an exclusively digital model.

Launched in 1970, the magazine was best known for its Dolly Doctor column, which answered awkward questions about health and sex readers may have been too embarrassed to ask their family. The axing is being referred to the end of an era by ex-editors, including Mia Freedman and Lisa Wilkinson.

Sad to learn of passing of #Dolly magazine - a bible to so many generations of young Aussie women & where so many of us got our start. Vale.

In January this year when it first announced the reduction in frequency Bauer stressed that Dolly would also be taking a “digital-first” approach. As such, Bauer says Dolly recorded its best month online this month.

Nick Chan, CEO of Bauer Media, says: “Dolly readers predominantly engage with the brand on digital and social platforms and they do so with greater frequency than is possible with a bi-monthly magazine, this means it’s no longer feasible to continue publishing the magazine on a regular basis.

“Dolly has played a part in the lives of many Australians over the years, which is why we’re delighted its outstanding content continues, but now exclusively on the channels today’s teens prefer to interact with most.”

The move follows big changes at Bauer as Chan works to cut costs across the business and streamline its magazine offering. Earlier this month, Bauer sold off five of its Adventure titles. It is understood that more magazines will be axed or sold off as Bauer focuses on digital acquisitions.

While Dolly's print circulation has long been in decline, Bauer says November will be the biggest month for online traffic in Dolly's history, with the number of page views already up 77% year-on-year and users up by 18% from the same time last year.

It is estimated that Dolly will hit 1.2 million sessions this month. Across its social channels, audiences are also growing rapidly up 76% year-on-year.

It claims that more than 90% of Dolly's 14-17-year-old target audience interact with the brand via their smartphones, with the mobile first dolly.com.au redesigned as a fully responsive on demand mobile site early this year, proving popular with its audience.

All full-time staff impacted by the change are expected to be offered other positions within Bauer. The last bi-monthly issue of Dolly with be three collectors covers featuring members of Aussie band In Stereo.