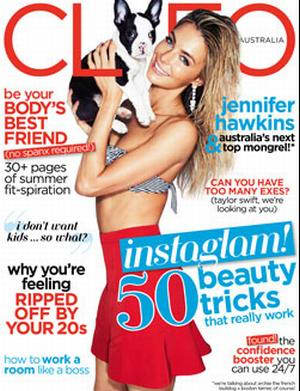 After days of rumours, Bauer has finally confirmed that Cleo magazine is set to close in Australia.

The announcement also sees the magazine's sister title, Dolly, go from a monthly magazine to a bi-monthly, with the publisher saying the title will now take a “digital-first” approach.

Interim CEO of Bauer Media, Andreas Schoo, says: “I would like to thank Lucy Cousins and all of the Cleo editorial team for their ongoing dedication to the magazine over the years.”

Bauer is set to start a search for a replacement Dolly editor, with Cousins choosing not to stay on with the brand.

Schoo adds: “Scale, engagement and a robust digital strategy are key to our success and we believe we have a compelling offer in Dolly and Cosmopolitan to lead our young women’s portfolio into the future.

“Our investment plans for Dolly will see us take a digital-first approach, with a focus on mobile video, social media and ecommerce supported by restructured print and digital editorial teams to ensure we are generating the best in market content for consumers - when and how they want it.”

Rumours started about the closure last week, with The Daily Telegraph reporting the title's imminent closure.

At present it is also unclear how many staff will be affected by the closure but a spokesperson told AdNews the matter of staff is currently being worked out by its people and culture section.

Cleo was launched in 1972 by Ita Buttrose, with the title quickly becoming one of Australia's most iconic titles due to its mix of controversial content, including the first nude male centrefold and detailed sex advice.

The closure of the Australian edition of Cleo does not impact Cleo Singapore, Malaysia or Indonesia, which were acquired by SPH Magazines in 2011 and have been successfully published independently, with their own content teams, since then.
Bauer Media will also continue to publish Cleo Thailand through its joint venture with Post International Media.

The final issue of Cleo Australia will be the March issue, on sale 22 February.