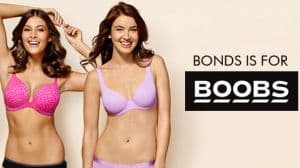 Banjo has taken itself off the Pac Brands roster. The move comes days after Clemenger BBDO Melbourne cleaned up at the Effies for the effectiveness of its Boobs campaign for the brand's Bonds business. Banjo boss Andrew Varasdi said it had pitched a "very similar creative idea" to the business.

Banjo gained a foothold on the Pacific Brands business in 2011, when it picked up business for Bonds. However, following pitch work for the brand in early 2013, has not been given any creative work since.

Meanwhile Clemenger BBDO Melbourne has been awarded numerous awards, including silver and bronze at Cannes earlier this year, and the AdNews ad of the year in February. Last week it won three gold Effies for the Boobs campaign, including one for most original thinking.

Varasdi said that the lack of work made the decision straightforward.

“We do not believe that our expectations of what being a rostered agency partner means is aligned with Pacific Brands management of the roster nor their understanding of the commitment that agencies make," said Varasdi.

“We are extremely proud of the work that we authored and produced for Pacific Brands after being appointed in October 2011. This is particularly true of the work that we developed for BONDS at a time when the brand was losing traction with Australian consumers”.

Varasdi pointed out that in the year following Banjo's appointment to the Bonds business, Pacific Brands reported an 18% increase in underwear sales, according to its 2013 results.

“Despite huge investment of time into the Pacific Brands business, the work we produced, the results it delivered and our pitch work for the Bonds business in early 2013 which featured a similar creative idea to the winning idea, to not have any opportunities on any creative work in over a year and a half is very disappointing. It is also not sustainable from a business perspective to be giving up opportunities to be on a non-functioning roster so the decision is a pretty easy one all things considered”.

Clemenger Melbourne MD Paul McMillan said the agency was unaware that Banjo was resigning its place on the roster, and was equally unaware of any ideas Banjo had presented.

"We are completely unaware of any campaign that [Banjo] presented. We presented ours, it was bought and run and we are very proud of the results."

Tanya Deans, general manager - marketing at Pacific Brands Underwear Group, said that Banjo had presented an apology campaign with the strapline 'Sorry Boobs'. "The idea was to apologise for the bad bras [we] made in the past," she told AdNews.

That was very different to putting Boobs into a Bonds logo, she insisted, and pointed out that the Boobs campaign began 12 months ago.

"There was no treatment of Boobs in a Bonds logo from Banjo, that idea came from Clemenger and they are two completely different ideas. We are delighted with the Clemenger work."