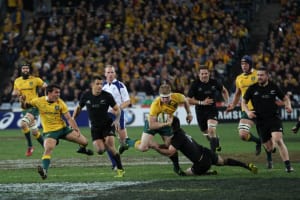 The Australian Rugby Union has secured a record $285 million media rights deal that will see expanded coverage of the code on Foxtel and Network Ten between 2016 and 2020.

It represents a 148% increase on the previous media arrangement and caps off an impressive year for Australian rugby, winning the Rugby Championship and making the final of the Rugby World Cup.

Network Ten has signed up as the free-to-air broadcaster and will simulcast all Qantas Wallabies domestic tests, including matches played in the Bledisloe Cup and Rugby Championship.

For the first time, Ten will also show a full replay of an Australian Super Rugby match each round on Sunday morning and a highlights show on Monday.

“The Wallabies are on fire at the moment and we’re very excited about being part of their journey and success over the next five years,” Network Ten chief executive Paul Anderson said.

The deal is worth more than $55 million per annum, up from $25 million but well below other football codes.