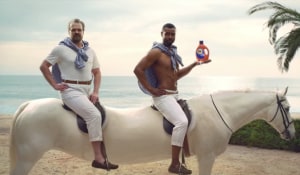 'It's a Tide ad' is tipped to win at Cannes Lions

Sports fans and lovers of advertising, boy do we have a good wrap up for you.

We’ll be regularly updating this story with all the best commercials from the Super Bowl 2018 that you need to see so keep an eye out.

The NBC this year is requesting more than $5 million for a 30-second spot, according to reports, and with three and a half weeks to go, the network has nearly sold out of ad slots.

In Australia, Seven has the broadcast rights.

In 2017, a chunk of the ads focused on social or political messages, with Audi promoting equal pay and Budweiser, 84 Lumber and Airbnb talking about immigration. While you’re here, check out our favourites from last year.

Toyota has its biggest Super Bowl ad buy ever, securing two spots in the big game. The ads push its global Olympics and Paralympics sponsorships.

Coca-Cola is back with another message of diversity and inclusion in its 12th consecutive Super Bowl appearance. The spot is by Wieden & Kennedy.

"This is the Pepsi that your father drank" - Pepsi throws back to its heritage for its Super Bowl spot, starring icons such as Cindy Crawford, alongside her son, and the celebrity cameos don't end there. It shows a short clip from Michael Jackson’s 1984 Pepsi commercial, perhaps best known for its fire-related incident. And what walk down Pepsi memory lane would be complete without a brief cameo from Britney Spears’ 2001 Pepsi commercial. It was created by PepsiCo's in-house agency, Creators League.

After several years of Super Bowl Babies ads, the NFL went in a totally different direction—and scored with this amusing campaign about touchdown celebrations, inspired by Dirty Dancing and starring Eli Manning and Odell Beckham Jr. of the New York Giants.

When Amazon's Alexa loses her voice, Gordon Ramsey, Cardi B, Rebel Wilson and Sir Anthony Hopkins try to fill her place in this spot by Lucky Generals and Amazon's internal creative agency, D1. Jeff Bezos makes a cameo. This was one of the most popular from the Super Bowl.

Tourism Australia cleverly tricked the internet into believing Chris Hemsworth and Danny McBride were starring in a reboot of the 1986-hit Crocodile Dundee. It's now been revealed to be a marketing stunt for this year’s the Super Bowl and has been celebrated globally, with Droga5 revealing itself as the agency behind the work. Read more about the campaign here.

Bill Hader and a couple film or TV crew guys discover a new way to eat chips in this commercial by Grey New York.

Aerosmith's Steven Tyler returns to the Super Bowl to rediscover his youth with Kia in this spot by David & Goliath.

Wendy's used its Super Bowl spots to through shade at McDonald's.

Keanu Reeves surfs on a motorcycle in Squarespace's Super Bowl ad. As you do.

You can't have the Super Bowl without Avocados from Mexico but you can have guac without chips, according to this spot.

DDB and Skittles created a series of teasers for the brand's 60-second "most exclusive Super Bowl ad ever," which it claims it will show to just one fan. The four 15-second teasers star David Schwimmer and feature him feeding Skittles to a sandwich and various other surreal scenes.

Supermodel Cindy Crawford is set to star in a remake of 1992's classic Super Bowl ad, in which she buys a can of soda from a drinks machine at a gas station. Two boys gawp from the sidelines, but at the drink rather than her. The 30-second remake will feature her son Presley Gerber too as well as other celebrities, yet to be announced.

New York's ad finds red and brown M&Ms "spokescandies" are walking down the block, Red bemoaning all the people trying to eat him. Then his human form emerges.

Budweiser isn't using its Clydesdales mascots for the first Super Bowl since 2001, featuring a brewery that turns out cans of water for places in need, to the tune of "Stand By Me."

Lexus' Super Bowl ad is a a tie-in with Marvel's "Black Panther" movie. It was created by Lexus' multicultural agency, Walton Isaacson.