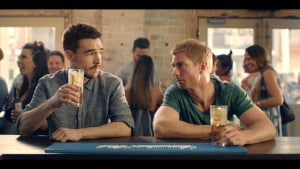 Current alcohol adverts often use actors who are perceived as being under the age of 25 – a direct contravention of the Alcohol Beverages Advertising Code, new research has found.

A study by researchers from UNSW Sydney, Monash and Curtin University sampled the views of 351 heavy drinkers (who often consumed 11 or more standard drinks per drinking occasion) aged 16 to 19 years old. Of the sample, 68 people were shown six print and online ads for different types of drinks.

As a group, 94% thought the character in a liqueur ad was under 25 years old, with close to 30% believing that the advert was marketed at people under the age of 18 years.

In the study, the apple cider and liqueur advertisements were often rated as ‘very’ or ‘quite’ appealing (60% and 44%, respectively).

“The majority of the 351 participants reported regular exposure to alcohol advertising, particularly on television, outdoor billboards and at festivals,” the study's authors say.

“The results of the study provide further impetus for a thorough review of how alcohol advertising and promotions and related controls impact on young people’s consumption and related harms."

Alcohol Beverages Australia, the body that represents companies such as Lion and Diageo, executive director Fergus Taylor told AdNews the results weren't shocking, but not because of an alleged violation in advertising regulations.

He says the 'heavy drinker' sample group is naturally more likely to respond favourably to alcohol ads. Taylor referred back to existing research around the subject that indicated where the 'real causes' for underage drinking were more commonly found.

"The evidence-based and widely accepted factors affecting underage alcohol consumption are parental and sibling influences and peer drinking behaviour, and the ABAC standards ensure advertising doesn’t target or appeal to minors or encourage irresponsible consumption - so it’s no surprise these interviews with heavy drinkers provide no evidence at all that alcohol ads cause underage drinking," he says.

"The federal government’s National Drug Strategy Household Survey shows that young people are getting the message and making better decisions about alcohol. About 82% of 12 to 17 years olds are now not drinking at all and Australians aged 14 to 24 have continued to delay starting drinking, up from 14.7 years in 2001 to 16.1 years now."

The ABA was unable to comment on the issue regarding actors in these ads appearing to be under the age of 25, as the ads show were not made accessible to them.

According to the ABAC code of conduct, a marketing communication must not depict an adult who is under 25 years of age.

A spokesperson from Carlton United Breweries (CUB) said that the company remained in line with the regulations set out by the Alcohol Beverages Advertising Code (ABAC) and did not target those under 25.