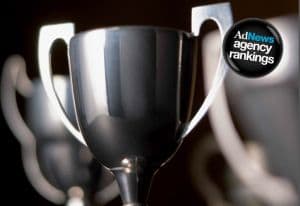 The points have been calculated, the rankings compiled. We can now reveal the final winners of the AdNews Rankings 2015/16.

For a full breakdown, pick up the current issue of AdNews in Print – you can subscribe, or get it via Zinio on desktop, Apple and Android devices. It's also available on iPad in iTunes.

Round three takes into account not just points for work, but also agency of the year programs. Work points are cumulative from round one and round two, and in round three include Festival of Media Asia, AdFest and the AdNews Agency of the Year Awards among others. We count agency categories from our own awards, as well as the Mumbrella, B&T and Campaign Brief agency of the year programs. Points are given for winning and shortlisted entries. Because it’s the final round of the year – as well as reporting the work rankings and the Agency of the Year Rankings as separate leagues – both are pooled to create an overall combined ranking.

These are calculated for individual offices, as well as for networks. In the Media, Digital and Advertising rankings we have different winners than last time around. It’s also all changed in the Media Company Rankings, which is a league table of media owners. The AdNews Rankings are based on award programs, which means that agencies and companies that opt not to enter awards don’t make an appearance, but it provides a benchmark for agencies to gauge their performance against the market. The full methodology can be found on the AdNews website along with the Top 25 in each category.