Winner of AdNews Agency of the Year revealed 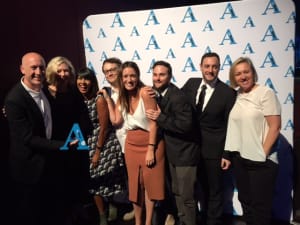 The Monkeys was named the AdNews Agency of the Year last night, alongside winners in every other category.

Relative newcomer Atomic 212 took home the Media Agency of the Year award, while Carat was named the Media Network of the Year.

M&C Saatchi had a good run picking up three awards. Two for its 'Game of Balls' work for Blue Balls Foundation, Lexus 'heartbeat'.

Cummins&Partners founder Sean Cummins was inducted into the AdNews Hall of Fame. Watch his highlights reel here. You can read a profile of Cummins in the print edition of AdNews also out today (4 March) or you can get it on iPad now.

Missed the awards? Watch the highlights below.

Small Agency of the Year
Maud

Independent Agency of the Year
The Monkeys

Advertising Network of the Year
Whybin\TBWA