Age is the new diversity problem in advertising 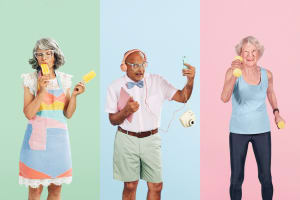 The issue of diversity in advertising is one that continues to plague the industry and one that generated discussion at this morning’s International Advertising Association (IAA) event – however this time it wasn’t about the representation of sex or race, it was about age.

The Forgotten After Fifty event, hosted at Sydney's Cockle Bay Wharf, asked why there is so little advertiser love for the growing and influential 50+ demographic.

Speaking on the panel of industry speakers, Ipsos research director Laura Demasi said marketers have finally caught up with the multicultural Australian population, with brands Woolworths including a more representative cast in its campaigns, but now it’s time for them to address ageism.

However, a total 94% of actual agency staff are under 50-years-old, which leaves a huge gap in between advertisers and a burgeoning market, according to Demasi. She believes marketers are neglecting the opportunity to communicate to this powerful demographic because of self-interest.

Earlier this year, a PwC report found the average Australian marketer is a 27-year-old male, which speaker Russell Tate, executive chairman of Macquarie Media Network, said is leading to a disconnect in advertising for over 50s.

“The over 50 demographic may not be playing Pokémon Go but they aren’t buying adult diapers,” Tate said.

Tate said the generation of over 50s we are seeing today are unlike any before, yet there are still preconceptions of the demographic that aren’t true, such as they don’t spend and their looking forward to retiring. These stereotypes are contributing to the distorted picture of what the 50+ consumers looks like.

“We all know the insurance ads that show a grey hair coupled walking on the beach. People are pissed off at the patronising advertising they are being targeted with,” Tate said.

Cummins&Partners founding partner Kirsty Muddle said it doesn’t matter the age of the marketer, it’s an agency’s job to measure and optimise media insights that allows for the targeting of this demographic.

Reckitt Benckiser head of media Rowena Newman said for clients such as Dettol, Air Wick and Nurofen, the company doesn’t tailor messages to the over 50s demographic, rather uses TV to broadcast to a mass audience.

“The age old FMCG model that isn’t broken yet is that you broadcast to as many different households as you can through TV to give them the news about your product. So we buy a broad demographic when we buy TV broadcasts,” Newman said.

She says while the TV consumption is down for other age demographics the over 50s bracket is the exception, actually seeing an increase in readership. Due to this fragmentation for other age groups, Newman says she is more concerned with targeting young females and mums who are time poor.

“50+ just turn up in droves watching TV so it’s not something we have to worry too much about,” she said.

Muddle said as media habits are changing, TV may not always be the way to target the over 50s demographic in the future and it’s a misconception they aren’t on digital platforms.

She believes if the creative is great, you should be able to target a millennial with the same message as over 50s.

"To create an ad that connects it's the message, not necessarily the casting and then most importantly it's how you push your content out," Muddle said.

"TV buying is about to change even more with digitisation so unless you are targeting a particular audience, you are going to miss them."