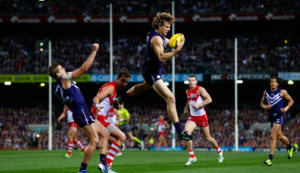 The Australian Football League (AFL) is set to undergo a rebrand, with a team of designers reportedly set to develop a new logo for the league.

The Herald Sun has reported that the league will refresh its current logo, which has been around since 2000.

According to reports a team of designers have been approached to create a new, 'modernised' version of the league logo.

The last time the AFL changed its logo, the intention was to interact with younger fans in the hope of also developing its grassroots engagement levels.

The AFL is also expected to invest upwards of six-figure into the search for its new logo.

It appears the intention of this rebrand has similar intent, while also reportedly needing to be "more flexible" for special rounds and events that occur throughout the year.

The current logo is also heavily tied to the game's current main sponsor Toyota, which recently renewed its deal with the league investing another $74 million into the game, with the AFL likely to develop a look that can effectively incorporate the brand.

The NRL also underwent a logo refresh this year, as the opposing football league concluded a two-year research process into the game's fan base.

Previously speaking to AdNews Peter Jarmain, NRL head of marketing and brand says the business recognised a need to engage fans through positive messages, as the game grapples with a "static fan base" and continuing off-field scandals.