NRL rolls out major campaign revealing human side to the game 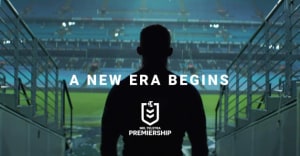 The National Rugby League (NRL) has revealed it will target "waning" and "emerging" fans in its new campaign, which focuses on a new generation of talent in the league.

The campaign, created by R/GA, launched overnight and was the culmination of an 18-month brand review by the NRL.

The review found the game was "under-indexed" within the younger fan base, particularly the 14-17 demographic.

"A New Era Begins" aims to put the next generation of league talent in the spotlight, highlighting the changing of the guard that characterises this season, following the retirement of several veterans including Jonathan Thurston and Billy Slater at the conclusion of last year.

Peter Jarmain, NRL head of marketing and brand, told AdNews the business recognised a need to engage fans through positive messages, as the game grapples with a "static fan base" and continuing off-field scandals.

The NRL itself has been faced with one of the most difficult off-seasons over the past six months, with multiple players tied up in serious legal matters.

"We often hear about the small percentage of negative stories but by and large, they're a really positive and authentic collection of players, both male and female, so it’s really important that we give people an insight into what they're really like and just connect with the fans on that level.

"Obviously we can't hide from the raw numbers so of course, we're always striving for growth in crowds and broadcast numbers as well."

To further positive stories, with a focus on the game's communities, R/GA is also launching an extended online content series for the NRL, designed to allow fans to delve deeper into the narrative of the main TVC.

"Stories of the New Era" is a collection of short films featuring behind the scenes footage and insight from players, while an editorial series on NRL.com further explores its coded imagery.

"We earmarked this year as a good kick-off point to relaunch the brand and also to leverage some of the other changes that were happening, not just the retirement players but also the emergence of all this new talent," Jarmain said.

Despite the need to relaunch the brand, Jarmain said the NRL's key metrics were up during the 2018 season, with TV viewing and crowd attendance growing by 3%, while digital engagement was up 400%.

He said the brand is always looking to grow these metrics but said the NRL was no longer facing competition from just other sporting codes, as younger fans were less engaged due to services such as Netflix.

"We need to make sure the game isn't viewed as just a sport but as an entertainment brand that would also resonate with some of those younger fans that historically we may not have engaged with that well in the past," Jarmain said.

The new launch campaign also features female players, which Jarmain said was an ongoing focus, and something the league had recognised as an opportunity to grow the sport prior to the brand review.

He said the NRL would continue to push the female league, which is currently in its second year, while also working to connect female fans with the men's game as well.

"We've been acutely aware of the need to engage those fans for a number of years and so we've been working on that, long before we actually conducted the brand review," Jamain said.

"The brand review really just cemented the need to engage with more female fans and that's not just about having a women’s product, it's also about the way we also engage in terms of the men’s product as well."

R/GA ECD Craig Brooks added the overall campaign, which runs across TV, social and outdoor, revealed a human side to the game, that relied on the changing nature of the 'modern' Rugby League player.

He said the use of social media became a bigger factor this year, with many of the younger players now "far more savvy with the platforms" than ever before, giving them a direct way to connect with fans.

"As you move on from this piece of launch film, we then have follow-up content that dives into the back stories to find out what it is about their moment in the film that's really true for them," he said.

"Then, when you follow it up with social stories, you get to learn a little bit more about these guys and their personalities, not just in the game but in their lives and in their communities as well."