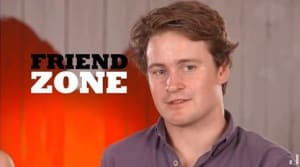 The channel Seven show pulled in an average metro audience of 589,000 and centres on strangers going on blind dates.

The date revealed that Birdsall, who is one of the cofounders of Media Thursday's, and Solly actually worked together at News Corp at the time of filming.

His attempt at wooing looked like it resulted in him being friend zoned, however AdNews can confirm the pair did in fact date for a short period of time after the show.

Unfortunately ladies, Birdsall is currently off the market.

Last night's episode is also thought to be the lowest ratings of the show this season, with viewership down 25% on last year's audience, which averaged at 785,000 per episode.

In other ratings news, Seven's House Rules was the most viewed prime time show, pulling in an average metro audience 1.08 million and winning two of the three key demos.

Ten's MasterChef had an average of 927,000 metro viewers and won the 18-49s demographic. The cooking show peaked at 1.53 million viewers nationally.

Nine News took out the lead spot in the top program ratings, with an average metro audience of 1.52 million, while Seven News came in second and drew in an average of 1.13 million metro viewers.