Medibank, Bupa and Optus called out for ads on 'hate speech' site 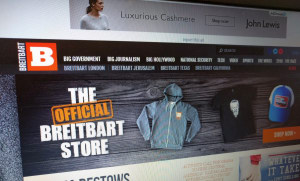 Breitbart gained prominence as a mouthpiece for many supporters of the US President Donald Trump ahead of last year’s election.

The Twitter account has already named and shamed Woolworths, Medibank, Optus, Bupa, TPG, Bendigo Bank and Domain Group, urging them to remove their ads from “racist” and “sexist” content.

A Woolworths spokesperson tells AdNews the ad is not directly for Woolworths, rather one of the brands it stocks. However its logo appears on the site.

"We can confirm this is not a Woolworths placement and that it is an ad bought by a supplier using our logo. We have strict advertising practices in place to avoid our ads appearing alongside inappropriate content and we're investigating this further," Woolworths says.

An Optus spokesperson told AdNews the company "does not support the placement of our advertising alongside harmful or inappropriate material" and as a result have removed its ads.

Sleeping Giants is also keeping an eye out for hate speech in Australia’s mainstream media in an attempt to deny advertising revenue to those publishers.

Its mission statement on Twitter reads: “We are trying to stop racist and sexist media by stopping its ad dollars. Many companies don't even know it’s happening. It's time to tell them.”

In June, The Washington Post reported that Breitbart had lost 90% of its advertisers in just two months. Amazon was the focus of protests and petitions as it remained a major advertiser on the site.

Sadly blaming the system makes you look like an uncaring corporate citizen unlike the 3,000 other companies who have done the right thing https://t.co/WEBbX2iZ3E

The reminder of the dangers of programmatic advertising comes several months after dozens of brands globally halted advertising on YouTube after it was revealed ads were being placed next to extremist content.

At the time, Google assured advertisers it was overhauling its policies and introducing new measures to ensure brand safety.

However, as one advertiser pointed out, the placements on Breitbart are a result of behavioural targeting and therefore controlled by Google.

A Google spokesperson commented: "Our policies govern where Google ads can be placed in order to ​protect users from harmful​, misleading​ or inappropriate content. We don’t comment on individual sites but we enforce these​ policies ​​vigorously and regularly review sites to ensure compliance."

Since Sleeping Giants began its campaign against Breitbart, more than 2500 advertisers have stopped advertising on the right-wing site. While the group can’t take full responsibility for the boycott, Australian businesses have already agreed to remove their ads.

Here's how some of the brands responded:

Confirmed: BUPA has blocked Breitbart, thank you for your speedy response we appreciate your actions #Auspol https://t.co/2cFJ47HMg6

CONFIRMED: @Optus have blocked Breitbart from their ad buy, thanks to the persistence of our fabulous GIANT @egadsthefuzz Thank You BOTH!!! pic.twitter.com/6MUIqUuUnB

Confirmed: TPG has blacklisted Breitbart many thanks https://t.co/ntalvkcvpb

Oh oh, we ran off course there. Thanks for letting us know and we'll let Melb Mara know too :) All the best - Ash