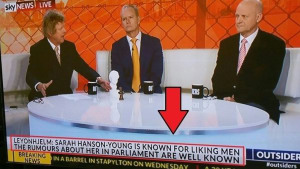 During the interview, he alluded to previous comments he made in parliament, which included him yelling at her to "stop shagging men" across the room.

Despite News Corp and Sky apologising, in a statement from the Greens, Hanson-Young has revealed she is now pursuing legal action.

"I am seeking legal advice in relation to the commentary between Senator David Leyonhjelm and the hosts of both the Sky News Outsiders program and 3AW Weekend Breakfast broadcast on Sunday, July 1," she said.

"Comments made by Senator Leyonhjelm about me and broadcast on these two shows are reprehensible, hurtful, and no woman, whether in public or in the privacy of her own home deserves them."

Thank you for all the words of support and care; they mean a lot to me. I am seeking legal advice - as many of you have suggested. As a woman, a sister and a mother, I will continue to stand up. I will not be intimidated or bullied by offensive & sexist slurs.

She also called on Leyonhjelm to resign, urging him to do the "decent thing".

A spokesperson for Hanson-Young confirmed that the legal action was being taken directly to Sky News, 3AW and Leyonhjelm.

AdNews contacted News Corp, which stated it would not be commenting further on the matter.