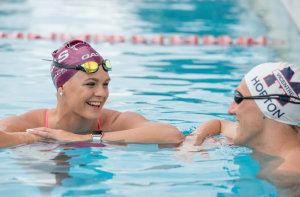 In the latest campaign since Optus revealed it was, once again, reviewing its agency arrangement, 72andSunny is encouraging Australians to 'Get Splashy'.

As a principal partner of Swimming Australia, the Optus campaign is designed to inspire younger generations to swim and continue to engage with the sport.

Slated as a first of its kind activation, Optus has launched an inflatable lilo race that will pit Australians against celebrities at the Commonwealth Games, called 'The Splashies'.

“What really inspired us about this first brief with Optus was the chance to create a cultural statement about the brand, and its role in swimming in this country," 72andSunny Sydney executive creative director Johnny Tan says.

“We are over the moon with this first work and we can’t thank the team at Optus and our team at 72andSunny for coming together and kicking this new partnership off in style.”

72andSunny were added to the Optus roster in March, with the telco confirming its was working on a "number of projects" with the agency, which AdNews understands could also include the EPL.

This year, Optus halved the number of agencies it work was working with as it shifts more capabilities in-house.