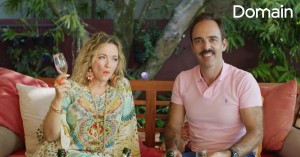 Domain has revealed its second major venture into content marketing with a new six-part online series, The Circle.

Unlike Avalon Now, which focused mainly on Sydney suburbs, The Circle is based in Noosa, Queensland. It follows 30- something couples who decide to leave their shrinking apartments in Sydney and Melbourne for a more affordable life in Queensland’s sub-tropical Sunshine Coast.

It hopes to create greater brand awareness for Domain in the region, with the majority of its readers hailing from Sydney and Melbourne.

As part of its foray into content, Domain previously tested its distribution model with the first series of Avalon Now being pushed through Domain’s social channels and the second hosted on its website.

The Circle will be hosted on Domain’s website in a bid to increase engagement times. An episode of Avalon Now was released each week, whereas the full series of The Circle will be available for viewing from Sunday.

“Based on the popularity of Netflix and Stan, people have come to expect the ability to watch an entire show in one go and on a webpage environment,” she says, adding The Circle has also cut down the length of each episode to more snackable clips of five to seven minutes.

“Content is key in terms of our marketing strategy and we are putting it at the forefront of all our social activations. Growing our audience, especially in the important market of Queensland, as well as keeping Domain top of mind, is what we are setting out to do.”

The teaser for the series has already received two millions views across social channels and 12,000 engagements, which is an early indication that the show will resonate with Domain’s audience, Young says.

She also believes it proves that people are now familiar with the Domain brand and what it stands for.

“We’ve been building a loyal audience for three years and people now understand and trust the content we do. There’s an expectation Domain will provide high quality content, regardless if that is through humour or property journalism. We’ve cemented our place firmly in that space,” Young says.

Earlier this year, Domain teamed up with home loan lender ME Bank for a branded content series that took a peek inside the often daunting world of Australian property.

For Domain, it’s a significant investment in talent. However, Young says most of the actors volunteer their involvement due to their relationship with director Felix Williamson.

Previously, Domain CMO Melina Cruickshank told AdNews she’d love to have Avalon Now and The Circle featured on Stan. With Stan also part-owned by Fairfax, it’s a tie-up that could be easily facilitated.