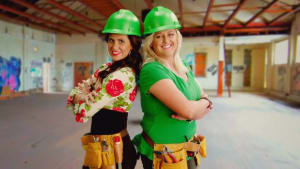 The Block contestants Sasha and Julia

Branded content is a lot like teenage sex. Everyone's talking about it but no one is actually doing it - except for Domain that is.

That was the bold statement from Nine Powered director of strategy and experience Melissa Mullins who was speaking at a recent NGEN event held in Sydney.

Nine's The Block welcomed back Domain as a main sponsor of the show for the second year this season. The real estate publisher leveraged The Block to debut two TV commercials featuring the stars of its online series, Avalon Now, and push people to its app that hosted 360 degree photographs from the show.

During this season of The Block Domain has tracked a 5% uplift in desktop sessions so far, assessing 12 weeks of pre campaign data to identify the impact of the show. On top of that, 42% of the audience being driven to the Fairfax-owned site are new visitors.

Also speaking at the event on the future innovation of TV was Domain national brand marketing manager Emily Murren, who said it was important for Domain to build on a traditional sponsorship with Nine.

“We never would have been able to reach those people without The Block. Our sponsorship is driving people who would have never visited Domain before," she said.

“We are a big believer in TV. We put a big budget into digital avenues but beyond that we wanted to to promote our business at scale to a broad audience and engage people at every stage."

Mullins said that the more brands that work with the network to produce branded content, the better the results.

“We can continue to evolve and innovate the way brands get involved with TV. The more brands leverage what a TV network can offer and the different types of content – that's when you hook audiences.

“If you find something that people care about, like property or cooking, and create that link it makes the partnership more powerful."

Murren tells AdNews Domain focused this season on tapping the audience of The Block and driving them to have a physical experience with its app, which has resulted in an increase in downloads.

The spring campaign used a multichannel approach across sponsorship, online content, TV and the roll-out of one of the nation's biggest outdoor campaigns.

Facebook has also been a key channel in amplifying editorial content, Murren says. Recently, Domain announced the launch of its Messenger bot on Facebook. Users could write 'The Block' in the bot and receive the latest 360 images from the show's room reveal.

The Domain 'M' was hidden in the 360 degree photos prompting viewers to hunt to find it and be in with a chance to win $20,000. So far, Domain has received 16,000 competition entries.