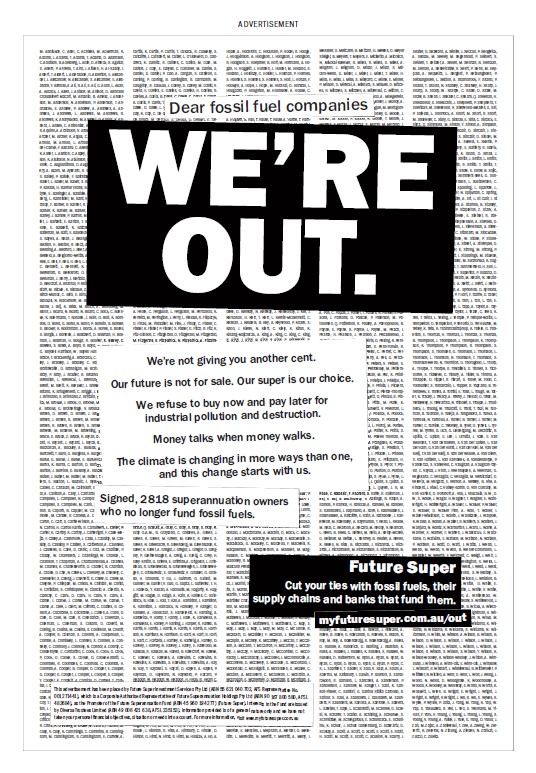 "Change starts when we stop investing in fossil fuels our future is not for sale.”

It is a movement signalling to the resource industry and traditional superfunds, that money talks when money walks.

More than three-quarters of Australians, 78%, are concerned about global warming.

This is up 12% since February 2014 and the highest level of concern for well over a decade since April 2006, 82%, before the Global Financial Crisis.

Superannuation is a powerful force that can be used for good: just 7.7% of the nation’s superannuation pot can get Australia to 100% renewable energy.

It’s time for Australians to stop investing in fossil fuel companies through their super.

“Australia’s future is not for sale, where your super is invested is your choice, we’re calling on Australians to stop investing their super in fossil fuels,” Future Super chief marketing officer Grace Palos says.

“The superannuation industry is opaque, confusing and misleading. Many Australians won’t realise that their hard-earned retirement funds are being invested into fossil fuel businesses.

“We’re Out is a movement signalling to the resource industry and traditional super funds, that money talks when money walks. Australians are taking action and cutting ties with fossil fuels, their supply chains and banks that fund them. If superfunds, banks and other financial businesses want to keep making money, they need to reconsider their loyalty to fossil fuels.

“The climate is changing in more ways than one, and change starts when we stop investing in fossil fuels our future is not for sale.”