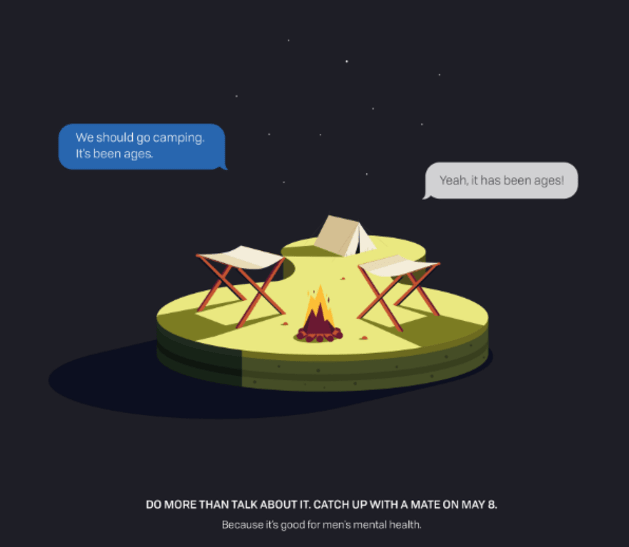 Catch up with a mate on MayEight and help tackle men's mental health issues.

Cummins&Partners and the Movember Foundation have launched a campaign to promote the second year of the 'MayEight' initiative, which encourages men to catch up with their mates to tackle social isolation and improve mental health.

Suicide is the biggest killer of young men under the age of 45. Part of the problem has been social isolation and a reluctance to open up about depression and other mental health issues.

The initiative was co-created by the creative agency and charity foundation in 2016 and this year was supported by partners including Triple M.

Movember Foundation APAC director Charlotte Web says: “MayEight is about encouraging guys to keep these connections because catching up with your mates is good for your mental health.

“It's a simple action that makes such a huge difference to men's future steering them away from social isolation and providing them with a support network for when things get tough,” Webb added.

The campaign, which featured images of potential plans with mates such as camping, eating burgers and fishing, appeared in a wide range of media channels across Australia leading up to the day.

Cummins&Partners co-ECD Tom Martin says: “MayEight also helps break down the social stigma of guys reaching out when they need help, because, even when discussing a serious problem, it still just seems like two friends catching up.

“We hope guys take advantage of MayEight and use it as a day to catch up with someone they've been meaning to for a while.”

SurfStitch kickstarts summer with The Stitch Up and campaign via Akcelo