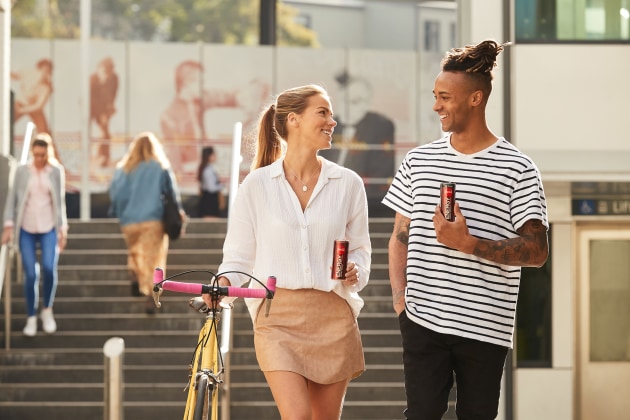 Coca-Cola Australia has announced the launch of the first energy drink with a great Coca-Cola taste, Coca-Cola Energy, supported by a high-impact integrated marketing campaign.

Due to hit shelves from 26 June, Coca-Cola Energy kicked off the launch by helping Free Dance Party founder Christie Aucamp-Schutte host her biggest street party yet in Sydney’s Circular Quay after her latest event was prematurely shut down earlier this month.

Hundreds of Sydneysiders joined in on the impromptu dance-fest for the return of Free Dance Party and were treated to the first samples of Coca-Cola Energy released in Australia.

With the tagline ‘Move with a new energy’, Coca-Cola marketing director Lucie Austin says launching with a street party that connects people through music and dance was a natural fit for Coke Energy.

“Like Christie and her Free Dance Party movement, we’re passionate about bringing people together in uplifting and positive ways - so what better way to launch Coke Energy than by energising a free dance party on the streets of Sydney,” Austin says.

"Disruptive" outdoor will also help bring the campaign to life. This will include a high-impact execution at Sydney’s Kings Cross where both sides of the famous ‘Coke Sign’ will be transformed.

“It’s an exciting product to be introducing to Australians and we think it will appeal to busy people on the go who are looking for an extra energy kick with a great Coca-Cola taste,” Austin says.

“We’re launching Coca-Cola Energy with and without sugar and we’ll continue to expand and diversify our range of products to offer Aussies a wider choice of drinks."

Coca-Cola Energy will be available in stores nationally from June 26.