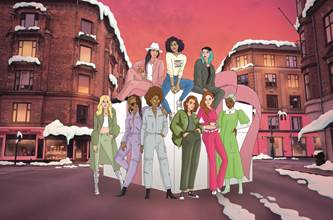 The COVID-19 crisis and the associated forced isolation and restricted movement, has led to an increase in reports of domestic and family violence.

Women who are experiencing or are at risk of experiencing intimate-partner violence have become more vulnerable as they are forced to stay at home with their abusive partners.

In response to the COVID-19 crisis, Our Watch, a national leader in the primary prevention of violence against women and their children in Australia, launched an updated No Excuse for Abuse campaign to raise awareness of non-physical abuse, which is often overlooked or excused.

Carat and Thinkerbell assisted Our Watch to ensure the campaign reached the broader public, and making sure potential victims and perpetrators could access support, and the community could develop a better understanding of what constitutes violence against women.

The campaign was launched to educate the public on different forms of non-physical abuse, including financial, technological and emotional abuse.

The multi-channel campaign across TV, online video, social and search was further boosted by using network talent to connect with the audience.

An important part of Carat’s media plan was to leverage the relationships morning show hosts have built with their audiences.

Supported by Sunrise and Studio 10, the hosts interviewed Our Watch Ambassadors Tarang Chawla and Rebecca Poulson.

These discussions were pertinent to raising awareness of the various forms of abuse.

The creative concept leverages the insight that various forms of violence can be subtle and is often excepted through off-handed excuses such as ‘it’s only because….’.

By muting these common but ultimately dangerous excuses, the idea encourages people to recognise non-physical violence as a serious issue that can be just as harmful as physical violence.

“By teaming up with Carat and Thinkerbell Our Watch has been able to create a clever campaign with a clear and concise message that resonates with its target audience," Our Watch CEO Patty Kinnersly says.

"We want the community to understand that non-physical forms of abuse, such as controlling how a partner spends their money or using verbal put-downs, are serious, inexcusable and preventable. There is no excuse for abuse of any kind.”

You can watch the No Excuse for Abuse ads and find out more about the different types of abuse here.