Terry Savage has issued an impassioned plea to a room of creatives, calling for the industry to stop declaring it's dead or dying and to instead, regain confidence in creativity.

Speaking at The Comms Council Think: Short event in Sydney today, the Cannes chairman said too often the industry is ruling itself out and believing headlines that holding groups are doomed and consultancies will kill agencies.

“There will be changing models, there will be new competitors but no one is dead and they won’t be dead for a very long time and I think we’ve all gone too far on being down on ourselves," Savage said.

"We need to recalibrate to understand that holding companies are going to survive. They’re going to change, they're going to modify and they might need to change their model, but they will survive."

Savage, who last year announced he is cutting ties with Cannes Lions after 2018, described the current state of the industry as a "battle ground", but urged execs to stop beating themselves up and referring to the industry as "in crisis".

"The industry is changing, of course it's changing and it's going to continue to change, but that shouldn’t create an element of negativity," he said.

This negativity is starting to impact the confidence of the industry, Savage explained, adding that creatives are no longer proud of their work as a result.

"It's sort of sad right now because we are giving ourselves the biggest beating up that you could possibly imagine in a time when in fact we should be on an absolute high," he said.

Savage is adamant that holding companies will survive and are a long way from dead and says it's time for the leaders of the industry to take a stand.

"We are still inherently embedded in what Cannes Lions is and that is creativity. If we lose that ability to think creatively, to be creative and to drive creativity, no matter what the platform is, then in fact, it is backward," Savage said. 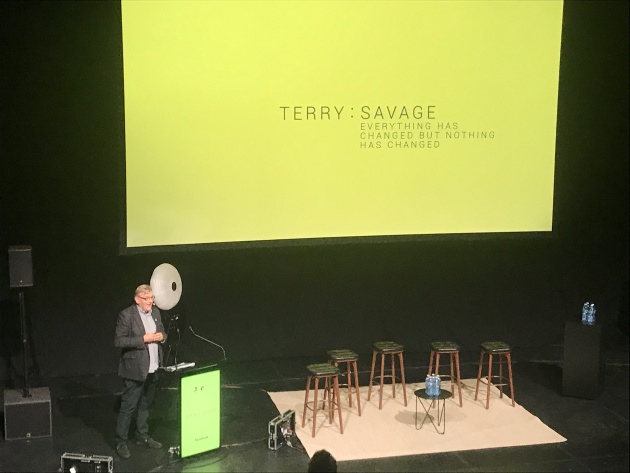 Terry Savage at the Comms Council event in Sydney

Savage said he was "horrified" by the industry’s response to the news Publicis was pulling out of Cannes Lions this year, announced at last year's ceremony.

"Cannes is the centre of creativity, the place you go to be inspired by amazing work, by incredible executions across all platforms and the headline story is that Publicis suspending for one year?" Savage queried.

"At a time where agencies should be celebrating, we were creating a negative impact on the one advantage the agency world has, and that is that they are more creative at this time than the other competitors that are coming to Cannes."

Savage went on later to speak on a panel about how Cannes Lions "hasn't lost its glory," despite the Publicis fallout.

"The industry is changing with force and that means creativity changes so the legacy thinking that has long been a centre piece of Cannes is also going to change," Savage said, adding that some people don't like that creativity can come from PR agencies, consultancies, in-house brand teams etc.

"Losing its glory is only a perception that will fundamentally be dispelled by thousands of delegates, and a Grand Prix being won -  and you'll have good years and bad years.