Bachelor underwhelms but which brand is behind The Kiss Debate? 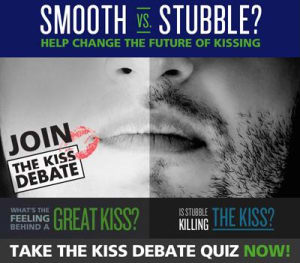 Sunday night viewers didn't quite shower Ten's The Bachelor with roses with the debut of the reality series netting less than 700,000. But just who was the mysterious sponsor of last night's premiere?

After weeks of promotion, The Bachelor Australia averaged a soft 669,000 metro viewers, according to preliminary figures from OzTam. However, it rated well among younger and female viewers.

A Ten spokesperson said: “The first-night numbers for The Bachelor were in line with our expectations. Typically, overseas versions of this show have built over time.”

The Bachelor's debut was sponsored by a mysterious brand who ran a series of ads spruiking Thekissdebate.com.au. The website featured a series of questions around preferences between kissing clean-shaven men and stubbled men, along with demographical queries.

While the site and ads were unbranded, Procter & Gamble's Gillette brand conducted a similar campaign in Canada. Called 'Kiss & Tell', the Canadian work also centred around the question of the 'kissability' of clean-shaven men versus men with stubble.

Ten declined to reveal its mysterious advertiser, for now, while the appropriate contact at Gillette could not be reached at the time of publication.

The Bachelor's debut numbers defied expectations of higher ratings due to social media talkability. Last week, the program had averaged a mBuzz score of 49.99, against a benchmark of 8.89. Media buyers had predicted the show could generate ratings of over a million viewers.

Currently, The Bachelor's mBuzz score sits at 137 and has more than 12,000 people talking about it on Facebook. It is still trending third on Twitter but was number one last night.

Nine's The Power Games: The Packer Murdoch story was a disappointing ratings follow-up to last year's Howzat: Kerry Packer's War. Despite featuring the same lead actor's portrayal of Packer (albeit, this time as Frank and not Kerry) and production team, the program only attracted 793,000 viewers compared to last year's 2.09 million for Howzat.

Elsewhere, Seven's The X Factor was the second highest rating program on Sunday with 1.55 million viewers.