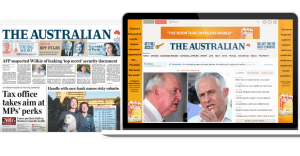 The Australian sees a 3.3% increase in sales

The latest Audit Bureau of Circulations (ABC) figures show what we all know to be true – print sales are declining. However, now major publishers are questioning the metric, which today has updated its combined print and digital circulation reporting.

The new ABC metric combines all print and digital sales to simplify the metric, taking all average net paid sales across the mediums and combining them into on overall sales figure. The update aims to respond to digital’s 24/7 consumption and create an uncluttered view of the total circulation sales figures for publishers, agencies and advertiers.

For the quarterly reporting period of the ABC data, from March to June 2016, Fairfax made the decision to remove its digital circulation numbers because it believes the figures, released by the Audited Media Association of Australia (AMAA), wrongfully suggest subscriptions at The SMH and The Age are falling.

Fairfax boss Greg Hywood said the digital subscriber growth at the SMH, The AFR and The Age were driven by new products, such as site licences, which are not reported in the AMAA numbers. He referred to the metric as an “incomplete measure”.

AMAA CEO Josanne Ryan tells AdNews the board was disappointed by Fairfax’s decision, but will continue to evolve the ABC metric according to what the market and publishers want.

“I don’t think anyone wants to be in the business of creating obsolete numbers. The update is a commitment to moving forward with the figures,” she says.

“For Fairfax to say it’s an “incomplete measure” I think is a misnomer – we went through a huge review and we are doing a lot of work in digital measurement.”

In Enhanced Media Metrics Australia (Emma), also released this week, the SMH was the most-read news destination, reaching 6.1 million people in print and digital in June.

Fairfax’s Australian Financial Review saw a 12.8% decline for its Monday to Friday issue in the ABC report, taking it to 49,900. Its Saturday issue saw a more significant drop of 15.2%.

Fairfax, which place emphasis on digital and less so on print, usually sees some growth in the digital ABC numbers, however those numbers are not available in this audit, for reasons mentioned above.

“Reductions in print circulation are the expected outcome from our focus on profitable publishing and are yet another demonstration of consumers' changing preferences," said a Fairfax spokesperson. "The continuing shift to digital, combined with our remaining print readership, sees our audience now being 13.3 million. It has never been larger."

The publisher's flailing print numbers point towards the move to a digital-only future, which Hywood says will happen, just not yet.

Speaking on an investor call last week, Hywood said it should come as no surprise that the seven day a week print model will eventually give way to weekend-only, or more targeted printing in the case for it’s for its Australian Metro Media (ARM) titles.

It’s a different tune to that of competitor News Corp. Yesterday, its CEO Robert Thompson said the company will continue with its commitment to print and underscored the importance of the newspaper at a time when “lesser media companies” are contemplating an exit for the medium.

News Corp’s best performer, The Australian, actually saw a 3.3% increase in its Monday to Friday edition sales overall in the ABC findings. An increase in the current media landscape is a big feat for any publisher.

The Daily Telegraph took a small hit in its Monday to Friday issue, losing 6.9% year-on-year, and its Saturday edition saw a drop of 4.5% overall.

He told The Australian that the Fairfax action raises the question about the validity of the whole audit process going forward.

He said media buyers and advertisers aren’t interested in circulation and the measure is the equivalent of counting how many computers are switching on in the country.

One media mogul tells AdNews it's no longer the way advertisers want to talk about figures and it's actually detrimental the entire publishing industry.

"TV doesn't report these numbers, radio only reports share - we are in a marketplace that's challenged and we keep talking against ourselves. It's not conducive," he says.

Bauer’s Cosmopolitan has taken the biggest hit in the magazine category, losing 42% year-on-year in sales, despite an 86% increase in digital sales. It's rival Cleo was culled earlier this year in an attempt to lift Cosmopolitan's sales.

When Cleo announced it would no longer exist, Dolly moved to bi-monthly. The shift has so far been successful, with the teenage-focused magazine figures up from the end of last year, posting a January to June circulation of 30,010.

New Bauer CEO Nick Chan recognises that Cosmopolitan performed poorly and tells AdNews the magazine will see a refresh in the next 12 months.

"There are pockets of good, bad and ugly," Chan says. "With Cosmo, we know we need to do better. The young women's market is still a prevalent market so it's up to us to create a more compelling product."

NW followed in big losses, with a decrease overall of 18.7%. Harper’s Bazaar saw a smaller decrease of 0.8%.

Speaking on Fairfax's decision to remove itself digital numbers, Chan says it could leader to more industry movement.

"It does force people to question whether it's a valued metric for advertisers," he said.

NewsLifeMedia’s portfolio took less of a blow, with Vogue seeing an increase of 0.01% in sales year-on-year and total sales audit of 42,986 per issue. Country Style also received an increase of 0.5%.

NewsLifeMedia’s CEO Nicole Sheffield says: “While we experienced some ups and downs in the audit our circulation results overall are stable. Our home titles continue to increase with Vogue Living and Country Style achieving the largest rate of growth year-on-year in the homes category; our share of the food category has increased to 73.1% with the top four food titles in the country; and Vogue Australia continues to grow in the fashion category.

Taste.com.au, which places first in the magazine category according to Emma data, saw a 5.3% drop in sales, but a 38% growth in digital.