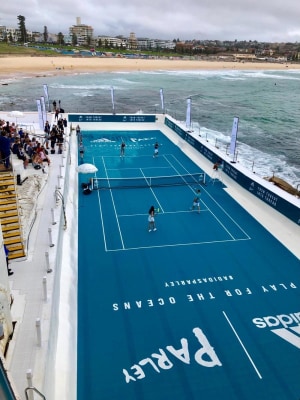 Adidas took over Bondi Icebergs to promote its recycled plastic range which is set to make its debut on the courts of the Australian Open.

The athleisure wear company set up a temporary tennis court after the pool's weekly draining to promote the collection.

The range was developed with New York-based environmental non-profit Parley for the Oceans and features tennis apparel and shoes made of plastic waste gathered from oceans.

With the Australian Open set to air on Nine on 14 January, tennis players such as Alexander "Sascha" Zverev, Caroline Wozniacki and Angelique Kerber, will wear the range.

Adidas is one of the many brands vowing to end their use of plastic and pushing messages around sustainability. It announced last year its plans to only use recycled materials in its shoes and clothing by 2024.

Sustainability has been a significant part of Adidas' brand purpose for a number of years with the the world’s second largest sportswear brand launching the first mass-produced running shoe made from recycled water bottles in 2016.

Adidas is the second major brand in a matter of months to use Bondi Icebergs as an advertising platform. In December Netflix turned the iconic landmark into a billboard for its new series Tideland.

As a result, Netflix received some backlash with some Australians likening it its takeover to the now infamous Sydney Opera house/gambling advertising saga.