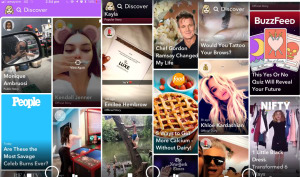 Snapchat has finally rolled out the update to its app and surprise, surprise – users aren’t happy about the changes, with some begging for the photo sharing platform to reverse the move.

The Stories page – where people could post their pictures and videos for 24 hours – has disappeared.

Instead, both Stories from friends as well as personal content are now hosted together on one screen.

Over on the Discover page, in between the news, there is a random mix of popular stories as well.

No doubt other changes will reveal themselves as we play with the new-look Snapchat.

The redesign follows a report from The Daily Beast that leaked internal information, revealing that Snapchat's biggest features, such as Discover and Snap Maps, aren't growing at all.

Snapchat announced it would be undergoing a redesign in November 2017 after the company posted slow revenue growth and missed its financial forecasts.

The redesign is intended to be more user-friendly for older Snapchatters and also allow easier access to content creators.

It isn't likely to impact the advertising units available on the app, which Snapchat has been increasingly investing in, from branded face filters to vertical ads.

"There is a strong likelihood that the redesign of our application will be disruptive to our business in the short term, and we don't yet know how the behaviour of our community will change when they begin to use our updated application," he said.

"We're willing to take that risk for what we believe are substantial long term benefits to our business."

Spiegel's prediction stands corrected today, as thousands of tweets pour in about the “horrendous” and “ridiculous" update.