Pay confessions: Work for nothing and clicks for free 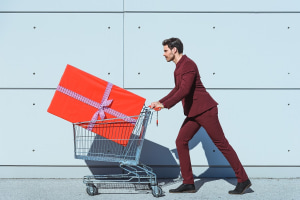 I have only met one person who admitted he once had a job where he felt he was being paid a bit more than he was worth. This sad confession came near the end of a big lunch.

His long-lost benefits included a bulging bag of cash, a car and a driver on call 24 hours a day, an apartment overlooking Hong Kong Harbour, someone to book impossible tables at the best restaurants and a long line of sycophants who stood on the other side of shy when it came to telling him how clever he was.

But most of us are governed by a universal law that says: You will never be paid what you’re worth.

That just-got-a-pay-rise feeling is good for a short time before underappreciation kicks in again. But pay is a relative measure. One person’s sumptuous is the low end of the scale for another.

We do know how much CEOs of ASX-listed companies are paid because this information is included in the thick paperwork lodged with authorities each year.

This year, the popular Pippa Leary moved from Nine, after a long sales career in digital, to ASX-listed advertising solutions provider Swift Media. As CEO, her base pay is $365,000, plus superannuation. She also has an option package, the value of which will be determined by future share prices.

At WPP AUNZ, the new CEO, Jens Monsees, started on a base of $1.5 million, almost 58% higher than that of his predecessor, Mike Connaghan, who got $950,000. Monsees also has a list of incentives which could in future years bring his take-home cheque to around $5 million.

The heads of the big media companies do better.

Hugh Marks at Nine earned a bit more than $5 million in 2018. The revenue for 2018 was $1.32 billion and that will go significantly higher with the addition of the Fairfax Media business.

But advertising and media pay doesn’t measure up to some. Each year the Australian Council of Superannuation Investors has a league table of CEOs at ASX-listed companies.

Alan Joyce, the CEO of Qantas, won this year with $23,876,351 of what is called realised pay. This is different to the number required to be reported in annual reports. It calculates pay as the cash received and the actual value of equity that vested during the year. Money in the pocket.

Joyce’s pay was boosted by the value of shares. He was the architect of one of the biggest corporate turnarounds in Australian business history, posting a loss of $2.8 billion in 2014 and a share price of a little more than $1. This year underlying profit before tax was $1.3 billion and the share price raced past $6.