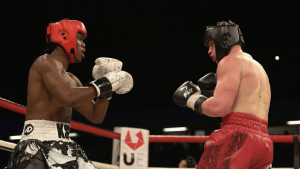 YouTube star KSI has confirmed he has plans to bring his next pay-per-view fight to Melbourne, should the opportunity arise.

During an interview with bookmaker and online wagering portal Oddschecker, the British YouTube personality and white-collar boxer revealed that he had real intentions to have his next fight take place in the MCG.

When posed the question about going toe-to-toe with controversial Australian boxing and former NRL star Anthony Mundine, KSI didn't rule out the possibility and reiterated that he wanted to travel down under to put his skills to the test.

A bout with a Mundine would be a potential goldmine for advertisers, as his previous fights have proven to be a consistent pay-per-view dollar earner and sponsorship goldmine.

Over his career, fights, including his infamous rivalry with fellow Australian boxer Danny Green, have grossed up to $20-30 million.

The YouTuber also answered confidently that he has full intentions of turning pro after his upcoming rematch with fellow YouTube star Logan Paul in a pre-arranged bout in America.

Dubbed as the ‘biggest event on YouTube’, the pair fought out a draw in front of 15,000 fans at the Manchester Arena in England.

The heavily hyped fight between Paul and KSI, that took place in August, also attracted an official audience of 773,000 pay-per-view streams although it is estimated that millions more watched the bout through unofficial broadcasts.

“I feel like I can go pro and beat someone that is more of a mediocre level, similar to mine, or more so that I could push myself," KSI said.

However, despite being known for his cocky persona, KSI was cautious when addressing questions about fighting elite level professional boxers.

It would be unlikely Mundine, who still considers himself very much a prominent fighter in the Australian boxing scene, would be willing to go up against KSI next year, particularly as confirmation of his fight with former world champion Jeff Horn is expected in the coming weeks, with the bout to take place in late November.

Despite original claims that both fighters had pocketed close to £40 million, KSI and Paul have hit back, claiming that the profits were nowhere near the reported amount, with Paul adding that it may have cost him money.

The rematch between the two is expected to take place in the first half of 2019, leaving it unclear as to when KSI would be able to make the trek to Australia.