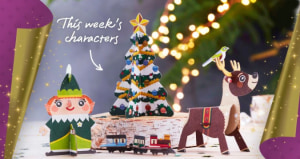 Woolworths is seeking to capitalise on the collectables craze which saw Coles boost its sales with its own Christmas collectable range.

Launching in stores today, the Woolworths Christmas Pop-Outs range includes 12 buildable cardboard characters such as santa, gingerbread man and snowman, to be collected with every $30 spent.

In a dig at rival supermarket Coles, who released its popular Little Shop earlier this year but received criticism for its heavy use of plastic, Woolworths says its range is completely recyclable.

“Customers will also be able to see what they are getting as the “Woolworths Christmas Pop-Outs” will not come in ‘blind plastic bags’ to help avoid duplication or disappointment and minimise waste," Woolworths said in a statement.

Woolworths managing director Claire Peters says it wanted to offer families something special for Christmas while being environmentally conscious.

“We are really excited to be able to offer Australian families a small gift that captures the fun, imagination and festive spirit of the season with the ‘Woolworths Christmas Pop-Outs,” Peters says.

“Our team has also spent a great deal of time ensuring that we considered the environmental impact when putting this together and we are proud to say that the range is 100% Aussie made and fully recyclable.”

The supermarket was expected to release its own collectables range to claw back sales from Coles after the Little Shop range dented Woolworths sales.

Woolworths group chief executive Brad Banducci said the collectable craze was partly to blame for the poor start to the 2019 financial year.

“Sales have been impacted by customers adjusting to the phasing-out of single-use plastic bags, a competitor continuity program (Little Shop), meat and fruit and vegetable deflation, and the cycling of our successful Earn and Learn program in the prior year,” Banducci said.

However, he now says that with the end of the Little Shop range, its customers are returning and sales growth accelerated in September and October to an estimated 4%.

Woolworths also released its Christmas campaign this week which focused on food and family.