Winners of AdNews Agency of the Year announced 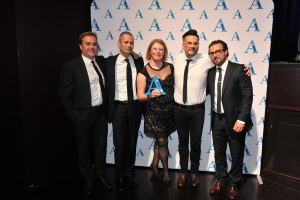 After much anticipation and hours of deliberation, Clemenger BBDO Melbourne has been named the AdNews Agency of the Year for 2016.

Clemenger's disfigured art piece, 'Meet Graham', from the Transport Accident Commision and Clemenger BBDO Melbourne, won both Ad Campaign of the year as well as the Branded Content Award - proving that not all winners are beautiful - but they are bold.

It total, six awards were won by Clemenger BBDO.

Atomic 212 was just shy, winning Independent Agency, Media Agency, Emerging Agency, Media Network and the People and Culture Award - a good run for the Sydney-based agency that started in 2014.

Atomic brought a little of the Highlands to the evening with a piper playing bagpipes when the agency went on stage to collect its awards and all 30 of the agency's staff attending dressed in traditional Scottish kilts to represent the coming together of clans.

Meat & Livestock Australia's 'Spring Lamb' ad further solidified itself as a benchmark of contemporary and diverse advertising, winning the award for Ad of the Year.

HCF was named the inaugural AdNews Brand of the Year award, a new category for the awards.

The AdNews #AdNewsAOTY hashtag was trending in two countries and 16 cities, and was the second higest trneding topic yesterday, and the live stream of the event reached 56,000 viewers via Periscope. You can watch a replay of the whole event here.

BMF co-founder Warren Brown was inducted into the AdNews Hall of Fame. A moving and inspirational speech by Brown and a heartfelt introduction from Margaret Zabel as well as a video link with BBH founder Sir John Hegarty had the 800-strong crowd on their feet in a standing ovation.

Watch his acceptance speech and highlights reel below.

Libby Minogue, executive general manager media and marketing at REA Group, says: “realestate.com.au congratulates Clemenger BBDO Melbourne and all winners from the 2017 AdNews Agency of the Year Awards. We are proud to support an industry based on innovation, culture and creativity.”

Check out the AdNews Snapchat (AdNewsAustralia) for snaps from the night before they disappear as well as our Instagram and Twitter.

These are the winners:

Media Agency of the Year
Atomic 212

Independent Agency of the Year
Atomic 212

PR Agency of the Year
History Will Be Kind

Emerging Agency of the Year
Atomic 212

Production Agency of the Year
Finch

In-House/Bespoke Agency of the Year
Virtue

Media Network of the Year
Atomic 212

Media Campaign of the Year
The Google App & The Voice

Ad Of the Year
MLA Spring Lamb – The Monkeys

The Best Use of Data
Snickers Hungerithm – Clemenger BBDO Melbourne

The Game Changer
ANZ's Push for an Equal Future – TBWA\Melbourne

Brand of the Year
HCF