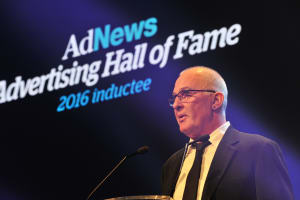 Warren Brown, the co-founder of BMF, was entered into the AdNews Hall of Fame tonight (9 March) at the AdNews Agency of the Year Awards.

From the age of 18, Warren Brown, wanted to open his own agency. The plan was to open a shop, get famous and sell it by the time he was 30 to spend the rest of his days surfing.

Brown, who revealed his decision to step down from his agency after 20 years on the day we sat down to do this interview, got most of it right – if not the timescale. BMF launched in 1996 and became part of Enero (then Photon Group) in 2007. His agency, which was at one time one of Australia’s hottest shops, was described as “the BBH of Australia”. It was the agency that The Monkeys wanted to be, before they were even The Monkeys.

Brown, is one of the most awarded creatives in Australia, with 19 Cannes Lions and seven D&AD Silvers. He’s most famous for his work for Tooheys, particularly ‘Tongue’s Quest’ in 2003, which redefined beer advertising in Australia; government anti-smoking campaigns which have run in 50 countries; and work for Meat & Livestock Australia, including the now iconic Sam Kekovich unAustralian spot. For Brown it was the 1993 ‘I’d like to see that’ ad for the AFL out of The Campaign Palace that was a turning point for his career. It’s just been resurrected with an homage to mark the start of the first Women’s AFL league, and the idea still resonates 14 years later

Despite many accolades, Brown is not one for fanfare or ego. He’s humble about the Hall of Fame inclusion and about the reason he got into advertising in the first place, claiming it’s because he “was crap at everything else”.

“Advertising is for all the misfits who aren’t really good enough to be screenwriters, musicians or feature filmmakers – but are pretty good at a lot of creative things. That’s perfect for advertising,” he said.

One of his earliest lessons came from friend and mentor Sir John Hegarty, the founder of British independent BBH, where Brown worked when he first started out in London. When showing the advertising legend his book, back when he “didn’t have a hope” he could make it in the industry, Hegarty closed the book and bluntly stated: “Warren, you could be really good or really terrible, but to be honest you don’t know the difference.”

From those early days, one of the skills Brown thinks he has honed over the years is being able to recognise an idea that will stick. And talent that can grow. One of his proudest achievements in starting and running BMF for two decades is being able to give others the same kind of opportunity to flourish, launch their careers and “pursue their dreams” – and have a great time while doing it.

“If you make it all about you it’s not going to last. The only way to sustain a business or keep the loyalty of those around you is if you have a genuine desire to make them famous, to get the best out of them, and fine-tune their abilities,” Brown said. “If I got it right more times than wrong, then I did ok and the agency is testament to that.”

While not ready to completely cut ties with advertising, Brown isn’t planning to start up a new agency. He’s ready to hand the baton on to the next generation, but there is a sense that it’s time to bow out because things just aren’t the same anymore.

“I’m just an old fart, pure and simple. The Rolling Stones are still touring but people aren’t looking at them to create the next big thing. It’s just not as fun as it used to be,” Brown admitted.

“I don’t want to diss the industry and say there’s no joy left in it because there certainly is, but you see a lot of people suffering more than they should. It didn’t used to feel like work - up until the last couple of years.

“It seems to be an accepted norm to be beaten up by the client these days. Clients and agencies are under huge pressures - it’s not all doom and gloom, but something will have to change.”

Another gripe Brown has about the industry is that it has become too much about awards and impressing other creatives – rather than making work that does what it’s meant to and gets the attention of the masses.

“At the time, in the late 70s, there wasn’t a lot of great advertising around [in Australia]. Most of the best work seemed to come out of the UK. It had a much longer and more sophisticated advertising history with so much talent.

“So, I sold everything and left for the UK. I didn’t have a job, I didn’t have anything. I just thought, ‘I’ve gotta be there and learn’. I was fortunate that I got to work with incredible people.”

Brown learned fast and the first ad he made won the British Television ad of the Year. After 12 years in the UK, the decision to move back to Australia went hand-in-hand with the plan to launch his own agency. But, returning to Australia meant re-establishing his reputation in this market.

Lionel Hunt hired him at The Campaign Palace in its heyday where he spent three years. It was Australia winning the bid to host the 2000 Olympic Games and the promise of positive momentum in Sydney that finally got the wheels in motion.

Brown and his partners Matthew Melhuish and Paul Fishlock decided to launch without any founding clients and hardly any money, which most people around them thought was “bonkers”, he admitted.

BMF had big dreams from the start and turned down its first prospective client.

“I never saw us as an agency that was only capable of doing little stuff. I’ve always felt that it’s just as easy to fail at the bottom as it is at the top – so why not start at the top?” he said.

The cornerstone of BMF and its most successful work is “the long idea” and Brown has always pushed for ideas that become part of culture.

“I’m a great believer in campaigns and great advertising work has the ability to touch people who are not even interested in the thing you’re talking about. I like that aspect of it, the mass appeal, so I’ve always tried to do something that has a broad, populist appeal,” he revealed.

Typical of Brown and his agency doing things on their own terms, the Tooheys’ tongue ad came out seven years - almost to the day - after BMF launched and transformed the agency as well as beer advertising in Australia. It was category-busting work.

“We believed we needed to do something radical … if you go outside what everyone is expecting it’s always going to be difficult, but I love that,” Brown said.

“I love being told ‘the client will never buy it’ and ‘it’ll never work’. That’s petrol in the tank for me. I almost need that to get going because it’s about risk.”

So, does Brown have any words of wisdom for those coming up?

“Don’t be afraid to chase your dreams. In fact, don’t just chase them, double them and then go for it.”

Have a listen to what Sir John Hegarty had to say about his former employee:

The photo gallery from the night is available here.

Check out the highlights from the night:

Previous Hall of Fame entrants include: