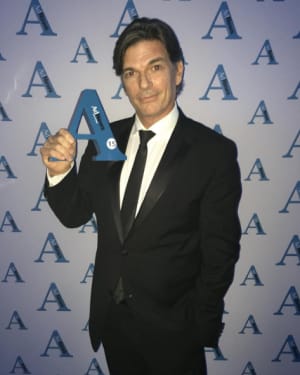 Sean Cummins, the contrarian founder of Cummins&Partners, was entered into the AdNews Hall of Fame tonight (3 March) at the AdNews Agency of the Year Awards.

The CEO of a network of agencies across Sydney, Melbourne, Toronto and New York, was presented the accolade by Jim Kiernan, formerly of Pope Kiernan and Black, who Cummins credits with his first foray into advertising.

Cummins follows in the footsteps of Scott Whybin, founder of Whybin\TBWA who was inducted last year and a raft of other advertising and media stalwarts. On accepting the award Cummins said: “Clients are the only reason I do this – not the awards. They are your benefactors and partners in a world you wouldn't otherwise have a chance to see.”

You can read a profile of Cummins to mark his entrance into the Hall of Fame, proudly brought to you by Think TV, in the print edition of AdNews also out tomorrow (4 March) or you can get it on iPad now.

When Whybin was entered into the Hall of Fame last year he talked then about the importance of advertising industry charging for its creativity and skills appropriately and warned against the next generation “underestimating” and “marginalising” itself.