M&C and Lexus have built a car with a heartbeat: Behind the scenes 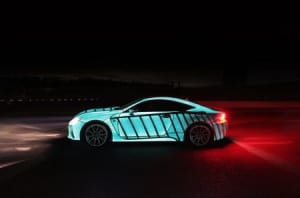 In a cold, dark warehouse in Redfern last week, AdNews got a sneak peak of the new concept car from Lexus that brings man and machine together.

The heartbeat car, as it's being called, uses the first paint that can hold an electric charge to turn the heartbeat of the driver into a pulsing, luminous light display.

M&C Saatchi's in-house innovation lab Tricky Jigsaw developed the paint from scratch, and built a machine that can convert the biometric data from the driver's heartbeat, into an electrical signal. The car has a separate “brain” in the boot, powered by its own battery with inverters that are responsible for powering each of the panels.

Watch this exclusive AdNews clip of the heartbeat car in action.

In the process of getting it to where it is now, the team burned through countless inverters as they learned how much power each could handle, and also countless panels for the car.

M&C says that the entire project – which will form the basis of a major campaign launching later this week – was designed to showcase the thrill of driving the Lexus F-series, and show off the car's performance capabilities.

In daylight, and when “the brain” isn’t switched on, the car looks like any other F-Series. Slick silver paintwork, indeterminable from any other but when the lights go out, and the brain powers up – the paint panels take on the emotions of the driver and light up in line with the driver’s heartbeat.

To show the heartbeat in action, Lexus asked three high performance drivers to test drive the car on a circuit with hairpin turns, to show how the pulse responded.

Jaimes Leggett, CEO of M&C Saatchi told AdNews that it's about reframing the luxury car market through innovation.

“We talk about the future being now – the connection of man and machine. It's been talked about but Lexus is actually doing it. Truly connecting the driver with the car,” he said.

Currently the concept car is designed as a marketing communication, he added, but it's likely there's a lot more to come.

Lexus CEO Sean Hanley, also told AdNews that the concept car is about showing the world the emotion that driving a high performance car has on a person.

The entire project, he said, was to “take the brand from a safe brand, to an exciting brand.”

Pick up this Friday's issue of AdNews in print for more from M&C Saatchi on the heartbeat car project.

Subscribe to AdNews in Print, or get it on iPad.