Why the NRL is 'Out for Blood' this Origin series 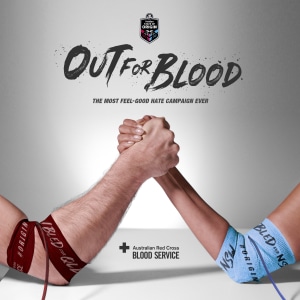 This year's NRL State of Origin will see more than just NSW and Queensland players drawing blood in the annual rivalry series –fans will be given the opportunity to do the same for their state.

The NRL and R/GA Sydney, who scooped the account earlier this year, have partnered with the Australian Red Cross to launch the 'Out for Blood' campaign.

This year's battle will also take place between fans in a new 'off the field' activation. As players go head-to-head on the turf, fans that spill the most blood can help their state win the off-field battle.

Two branded Donor Mobile Units will be touring New South Wales and Queensland in the run up to the series. Donations will displayed via an online tracker where fans can also pledge to give blood for their state.

NRL brand and marketing GM Peter Jarmain says it's just what the series needs as the brand looks to elevate the rivalry between the two states, with Maroons' long-term dominance over the Blues having an impacting on fan interest.

“Interest levels sort of wax and wane a little bit depending on who's winning and who's losing. What we really want to try and achieve this year is to remind people of the rivalry,” he tells AdNews.

“It transcends rugby league fans, it's such a big rivalry between to states and that's really the genius of this campaign. Our role is really to try and amplify that and bring that narrative to life through our communications.”

The 'Out for Blood' campaign includes films featuring former players Nathan Hindmarsh and Gorden Tallis, a series of digital display ads, out of home and social.

Fans who give blood at a mobile unit or an Australian Red Cross donor centre in either state, will also be able to show their support with branded bandaging.

R/GA Sydney, which won the NRL account earlier this year following a competitive pitch process, has been charged with not just elevating Origin, but also leading the charge for the NRL's digital forward strategy.

Jarmain was impressed by its digital credentials, with the NRL taking into consideration the work it had done with one of its biggest partners in Telstra.

“We increasingly operate in a digital environment and as a game we are doing a lot of work in that space, while also engaging youth. We felt as though R/GA understood that audience really well and I think that is evident in the work they developed for the Telstra Premiership,” he says

“The fans are consuming sport in a variety of different ways and in some cases are watching sport on multiple devices at the same time. The TV market is changing significantly and we are just making sure that we are providing content across a wider range of channels, while serving fans the best we can.”