Why did Russel Howcroft launch a newspaper at PwC? 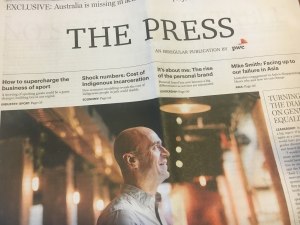 Russel Howcroft started at PwC as chief creative officer in March and one of the first things he did was launch a printed newspaper.

It’s not an obvious move for someone whose remit is building the consulting firm’s CMO Advisory Practice and helping clients with brand and marketing strategy, insights, analytics and creative solutions, but for Howcroft it’s a marketing move.

Its aim is to shift perceptions of PwC - both internally and externally.

“The fascinating thing about PwC is what people think it is, and what it actually is, are different,” Howcroft tells AdNews.

“When you look at the amazing stories that go on within the organisation you can only conclude that it does matter, so what's the best way to communicate the stories, opinions and innovations PwC is doing every day of the week?”

“We have a massive digital presence and you could argue that everything is covered off, but what's interesting is using newspapers as a marketing tool.”

Inspired by website Broadsheet and brands such as fashion website Mr Porter that have used printed papers as marketing, Howcroft says “it struck me that it could be a brilliant medium to communicate what this organisation is about”.

Its editor is Amanda Gome, former publisher of BRW and part of the editorial panel of ANZ Bank’s Bluenotes content play, and the content spans every aspect of PwC’s business.

It also keeps people within PwC informed about projects they don't even know are going on around them. The first issue had an interview with Anna Bligh and it’s also had interviews with former CEO of ANZ Chris Smith and ex-Facebook MD Stephen Scheeler - who joined PwC in May.

Simply called ‘The Press’, its tagline being ‘An irregular publication by PwC’, is a nod to the fact that it’s an “irregular” idea, says Howcroft. And also to the fact that it has no set printing schedule. It’s not monthly or bimonthly, but published as and when there are interesting stories to tell, and the time is taken to tell them well, he says.

Currently published around every six weeks, it has published two issues so far, with another on the way. It has a print run of around 5000 copies, all distributed internally at PwC’s Australian offices. It was designed by The Company You Keep, the designers behind Broadsheet, which used a print newspaper listings guide distributed in cafes as a marketing tactic when it launched.

In terms of its future, Howcroft would also like to see its distribution extended so that it can get into the hands of its clients at major blue chips, as well as potential clients. For instance, options could be distributing it at the headquarters of a major telco, airport lounges or even within national newspapers.

First issue had ads for TechCrunch

Howcroft wouldn't give any hints but suggested the next instalment will appear beyond PwC's four walls.

“It’s a great vehicle for staff engagement and communication. Over time hopefully more and more people get to see it,” he says.

It comes out of PwC’s marketing budget and at a cost of around $3000 in terms of print production, plus the time and resource put into the content, it’s not a massive investment. Feedback so far has been largely positive, says Howcroft, and its success is mainly judged on qualitative measures.

“It’s designed to communicate and be useful. Gome is also bringing a touch of the BRW editorial to it. At the end of every BRW article you always felt you'd learned something and there was something to take away. That's part of the ethos,” he says.

“I don't have a limited horizon for it, let's see where it goes. You don't want it to become a burden, or become wallpaper. It's for making a marketing impact and if that stops, then it’ll stop and we'll think about another idea.”

He also said it would happily accept outside advertising - and its first issue had ads for TechCrunch. But newspaper publishers are struggling. News Corp and Fairfax have both reported repeated falls in advertising revenue this year.

“It’s celebrating the medium and the power of newspapers. I don't think anyone disputes the power of the medium, but the difficulty is making money out of the medium. That doesn't mean the medium itself isn't brilliant at communication. When you're in a position to spend marketing money, that’s different than being in the business of having to make money [out of newspapers].”

For Howcroft it’s about people slowing down and absorbing information they wouldn't normally.

“I think there's something about a broadsheet that makes you slow down and anything that we can do at the moment to help us all slow down is a good thing. We tell people to take it home, spend some time with it. When you pick it up it has that effect on you, you just slow down," Howcroft said.

"The great thing about newspapers is that your peripheral vision gets used. You pick it up and something that you might not have had any interest in before is on the page in front of you, it piques your interest and off you go.”