What sporting heroes can teach us about leadership 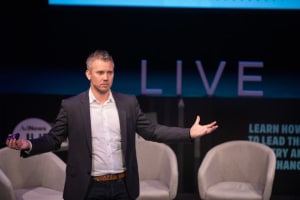 Magnetism, bravery and sacrifice are all attributes we can learn from strong sporting leaders and in turn, apply them to our working lives in the advertising industry.

Speaking at AdNews Lessons in Leadership event, to a room of media executives and aspiring leaders, MediaCom general manager Ben McCallum shared what he has learnt from his sporting heroes

He lists tennis greats such as Martina Navratilova and Andre Agassi as athletes who taught him important lessons including having respect and being brave. Agassi, McCallum said, taught him the importance of having “magnetism”, by being himself.

“It's OK to be different,” McCallum said.

“Never try to be the leader you think someone wants you to be. Be you at all costs.”

Basketball legend Michael Johnson taught him the lesson of sacrifice, while The All Blacks taught him to know what legacy you want to leave behind and to choose who will carry that legacy after you.

McCallum spoke with the fervour of an English football fan about the eight lessons Ferguson taught him.

The first lesson is building a foundation. This means knowing everyone in your team and even the people around your team.

“Ferguson knew the cleaners, the canteen staff and he even knew who washed their kit,” McCallum said.

By doing this leaders are able to understand the fabric of their organisation and what drives people.

Second lesson is to be brave enough to rebuild your team.

McCallum learnt this while watching the Manchester manager rebuild his squad in the early 1990s.

“He invested in the youth and accepted things are going to change. In his 26 years of success Ferguson didn't have one team, he had five.”

Even when teams have big wins leaders shouldn't be complacent McCallum said.

“That's ruthless but if you want to inspire leadership and actually deliver then it's what you have to do,” he said.

Third lesson is to set high standards and, this is the difficult part, stick to them, he said. Ferguson made sure players were held accountable.

Rather than simply working to build a good team, he wanted players to be mentally strong, be good off the pitch and have the right lifestyle.

“He set the standards and made sure he did it himself. In his career he has one or two very mild misdemeanours but he set relatively high standards,” McCallum said.

Fourth, is to never cede control and let anyone become bigger than the team.

“Don't let anyone become bigger than what your team is trying to do, and that's the same for any board room,” McCallum added.

The fifth lesson McCallum shared was how leaders must match the message to the moment, something Ferguson was well-known for, McCallum saying you have to adapt your style for the right person and that leaders need to know how to get the right performance out of people, which means understanding how to approach them.

Sixth lesson is leaders need to prepare to win.

Manchester United have scored 166 goals with one minute of play remaining and it's because they trained for it, McCallum said.

“The players knew where to be, what risks to take, and where to take them.”

The seventh lesson Ferguson taught McCallum is the power of observation - as it's vital for leaders to step back from time to time and observe how their team operates.

“Ferguson learnt more from observing than he did by being involved,” McCallum said.

The final lesson is to never stop adapting.

“The only way to manage change is to accept it.”