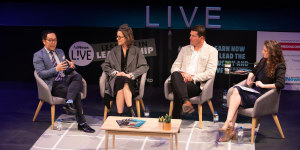 The role of CEO continues to shift within the media landscape, as more pressure from clients leads to new changes, forcing those in the position to adapt or exit, according to the panel speaking at today’s AdNews Lessons in Leadership event.

M&C Saatchi Australia CEO Jaimes Leggett has labelled the role of CEO as "one of the loneliest” positions in the business.

Speaking at the event, Leggett, who was joined by MediaCom CEO Willie Pang and Leo Burnett CEO Melinda Geertz, told the audience that heading up an agency can be lonely at times, due to certain parts of the role that cannot simply be shared with everyone.

“As a job, the CEO role is one of the loneliest out there and that’s not because you aren’t surrounded by great people,” he says.

“This is a role where you have to make hard decisions and some of those decisions have to be made on your own."

He went on to explain how there are occasions where you have to carry the burden at times as you "get paid for what you don’t say", adding that it's the CEO's job to keep the team motivated, and not create a culture of concerned or unmotivated workers.

While Leggett says the role can be difficult and requires hard choices, he also adds that the modern CEO needs to have a stronger connection with staff than ever before.

He, with the rest of the panel, all shared a sentiment that collaboration with staff was key to driving an effective agency and created a better internal culture.

Keep an eye on AdNews for more content from the panel

Geertz said she doesn't feel lonely at the top and describes herself as a leader who relies on “heavy staff firepower”, adding that she needs that energy to develop a collaborative workplace.

“I wouldn’t assign myself roles like ‘democratic’ because it’s not just about the collective sharing of ideas. What I do know is that it’s not effective to take a ‘me, me, me’ approach,” Geertz  says.

“It’s about having a whole group of people who you can ‘unleash’ and by doing so, they understand that we believe, trust and enable them.

“Yes there are big call decisions and I have to make them sometimes, but ultimately it’s about a concept of ‘collective leadership’.”

Geertz says staff need to understand a sense of collaboration and that can only come from the top.

Pang, who is eight months into the CEO role, revealed a similar approach, which he labelled ‘the servant leadership’ strategy, by which he urges his team to ask what they can get out of him in the top job, rather than pushing his plans down on his employees.

“My guiding principle is that I take a servant leadership approach, which is different from those who think about the CEO roles as someone sitting at the top of their triangle and everyone’s job is done to serve them,' he says.

“Great leadership starts the other way around. It’s about developing a fair perspective that makes everyone involved, because life is busy, so finding a way to bring work and life together in unison is what great leadership looks like," states MediaCom CEO Willie Pang at today's AdNews Live: Lessons In Leadership.

On a day-to-day business, Pang says there are two main roles he has a close relationship with to enact this strategy: the CFO and head of talent and HR.

“They both play a big part of my ‘servant strategy’ by covering off the areas that I need help with the most, that being managing finances and creating culture, and by taking that on-board and understanding the collective needs of the business, it gives me a greater perspective on how to effectively lead.”

Also on the '3 CEOs 3 Paths To Success' panel, Leggett added that this boils down to creating a tricky balance of democracy and autocracy within a workplace.

He says that while democracy is great for driving an inclusive response from a team, it is not always the most efficient way to approach certain client expectations.

“This is where autocracy comes in. Autocracy, even though it is not brilliant for culture, it allows things to move quickly and, at times, is the best solution,” Leggett says.

“It’s about striking the right balance between the two, something I have failed to do on certain occasion, yes, but ultimately when the two can be used in combination, it yields stronger results.”

Leo Burnett's Geertz told the audience her rise to leadership was based on “accidental courage and curiosity”, saying that the biggest issue with leadership is often being closed off to the long-term requirements of a CEO.

“The bigger challenges are keeping the pace while not getting bogged down in short-termism,” she says.

“You have to be prepared to change constantly, remain agile and have an established, long-term, strategy if you are going to have any success in leadership.”

Keep an eye on AdNews for more.