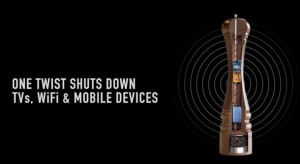 Watchdog: Hi, I was interested in picking up one of those Pepper Hacker things [a high-tech device disguised as a pepper grinder which cuts out wi-fi signals in a certain radius, meaning the kids will get off their phones and come eat dinner] I saw on Facebook and I can’t find any info about it on your website.

Dolmio: Unfortunately they’re not in mass production at the moment, so you can’t really do that.

Watchdog: What do you mean? You guys advertised it.

Dolmio: It was more of a social experiment rather than anything else. The cost of producing them would be way too much.

Watchdog: Do they not exist?

Dolmio: No, they definitely exist and are real, it would just be too much to produce them.

Watchdog: What do you mean?

Dolmio: There were only two created for the campaign, I mean, to mass produce them would be cost prohibitive. It would cost them between $15,000 and $20,000 to do it.

Watchdog: Oh, so are there any plans to mass produce them in the near future?

Dolmio: You never know, somebody could pick up theidea and run with it, but not at this stage.

Watchdog: Then should you be advertising them if they’re not available? I mean, that’s pretty misleading.

Dolmio: Well, that’s just one of those advertising things. It was really a social experiment to reinforce the point that we need to switch off at dinner time and come to the dinner table rather than us advertising a product for sale. Sorry we’ve
disappointed you with this.

Watchdog: Well that is disappointing, I really wanted one.

If you’re going to use largely theoretical technology to sell a brand message, you should probably make clear that the technology isn’t actually for sale. In the least, it would avoid weird phone calls and emails asking about it, but the call handler did explain it all clearly.