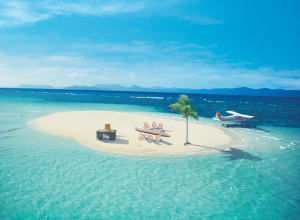 For its new coast campaign, Tourism Australia is investing in one of its biggest ever shoots to produce a range of film and virtual reality video, giving consumers “a little slice of Australia”.

The shoot, which kicked off last week, will feature content from 12 different aquatic areas from Katherine Gorge to the Great Barrier Reef filmed over a more than six week period as part of Tourism Australia’s next major campaign.

It marks the first time Tourism Australia has focused solely on Australia's aquatic and coastal regions and will be distributed to 150 countries starting early next year.

Virtual reality will be a key part of the campaign as it aims to help consumers “feel” Australia to drive conversion.

Tourism Australia CMO Lisa Ronson told AdNews that the campaign is a huge investment for the organisation, with it spending roughly half of its media dollars on it in the coming year, and with a heavy base in film.

“It's one of the biggest shoots that Tourism Australia have done,” Ronson said.

“We stated with the campaign idea around wanting people to experience what it is to live the Australian way of live which is really about the aquatic and coast experiences, and wildlife.

“What we thought about was how can we really bring that idea to life, and that’s really through traditional means like film where we can capture the emotion and the experience.”

Finch film director Nic Finlayson, who is part of the shoot, said that shooting Australia in full 360 is a huge challenge but that the virtual reality component helps drive immersion.

“To our knowledge, this is the largest and most complex film and virtual reality project undertaken,” Finlayson said.

“I love this idea that Australia is a country you can feel. For me, it’s the perfect relationship between tech and story - there is just no better way to explore extraordinary landscapes than this. The places are the hero, and the virtual reality just gets us a lot closer to them, in terms of feel.”

Ronson said that while virtual reality has an obvious consumer appeal, it also has a benefit for trade partners.

“What virtual reality does is it takes it to a whole other level in terms of immersion to really understand what it feels like to have an experience in Australia,” Ronson said.

“We’re looking to use that as part of our overall campaign and that will be targeted not only to our customers, but will be the next line of tool for trade, so they can get a better understanding of what we've got to offer, and how bet to sell the opportunist to potential visitors.”

Tourism Australia has earmarked aquatic and coastal as one of its key campaign vehicles going forward, with Ronson telling AdNews earlier this year that the campaign would continue to drive its brand tagline of, 'There is nothing like Australia'.”

Responding to claims in The Australian Financial Review that Australia is missing a national brand similar to New Zealand's “100% Pure New Zealand”, Ronson said all of Tourism Australia’s major campaign hark back to its tagline.

The campaign is part of response to stiff competition from countries such as South Africa and the US which are increasingly promoting their own aquatic and coastal experience.

Ronson said that showcasing what competitor nations don't have – diversity across coast experiences – is key to the new campaign, she sees as a long term marketing vehicle, similar to Restaurant Australia. It will also include a documentary featuring David Attenborough showcasing the Great Barrier Reef.

Another focus for Tourism Australia is digital, with Ronson noting that user generated content will continue to be a big part of its aquatic push.

Ronson said she recently restructured her team so that content and social falls under part of Tourism Australia's digital transformation team to allow it to get the story telling for Australia and the content spot on.

“We get great engagement with our social and a lot of the images that we get on a daily basis from people are aquatic and coastal based so we'll be looking at that as key part of the campaign,” Ronson said.

“We're really telling the broader story of Australia not only through our own eyes but through the consumer’s eyes.”

Executive creative director at Clemenger BBDO - which is the creative agency of Tourism Australia - Paul Nagy said the newest campaign aims to "get under the skin" of the Australian experience.

"There really is nothing like Australia, it's a country you can totally immerse yourself in," Nagy said. "We're trying to get under the skin of our way of life and all that we have to offer - particularly when it comes to our aquatic and coastal environments.

"Hopefully through utilising the latest technology we can give you a feel for it before you even arrive."